FOLLOWING on from their good start to the season St Duthus now turn their attentions to the Football Times Cup. In the first round, they welcome the Nairn County U20 squad to the Links.

Several key players have been sidelined ahead of tomorrow's cup game, including captain Jon Campbell, Cammy Mackintosh and Martyn Farquhar. The Saints' chances, however, have been bolstered by the news that Miller Mackay may be set to make his competitive debut, and we could see returns for messrs Garry Macleod, Ewan Ross and Will Ross. Reflecting on the past week, manager Stuart Ross is hopeful that the pace shown against Halkirk can be carried into tomorrow's game.

"I’m delighted to have taken maximum points from each of our games so far this season, but the most pleasing thing was seeing the boys play at a tempo that I know they can play at week in week out. I’ve seen it in training, and it was great to see them unleash that on a team in a game. We didn’t give Halkirk any peace. The boys’ fitness is beginning to shine through, and we’ll be going out on Saturday against Nairn looking to do exactly the same." 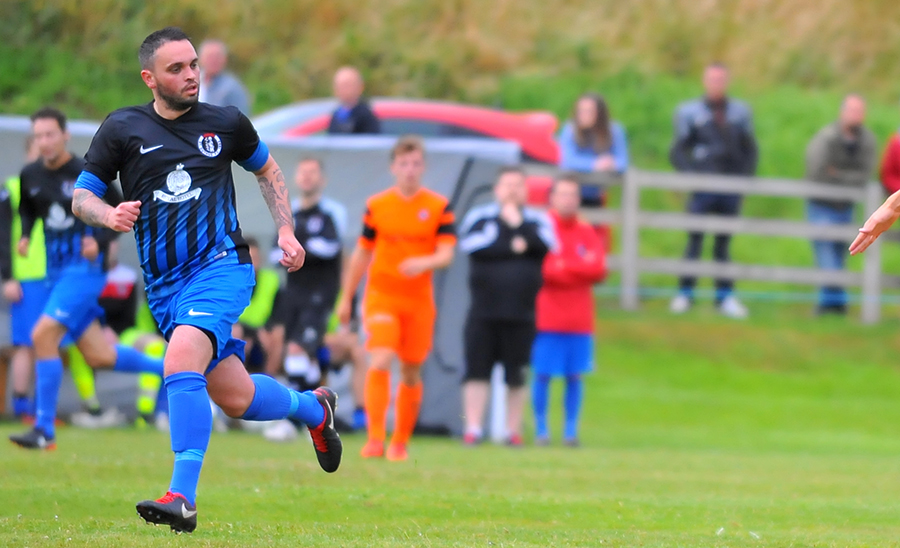 Garry Macleod is set to make a return for Saints

Last time around in this competition, the Saints missed out on qualification for the quarter finals after losing on penalties to Shetland FC up in Halkirk -- following a thrilling 3-3 draw that saw the Saints come back from a 2-0 deficit with ten minutes to go. This time around, St Duthus will be the hosts - and their visitors are Nairn County FC U20s.

Nairn County U20s this season embark on their first full campaign as cup entrants, having previously entered as a substitute team in last year's Jock Mackay Cup. Coached by Stuart Finnie, the "Wee County" have an established youth set up which has seen many players graduate through the ranks at Station Park leaving the U17s to get their first taste of adult football by playing in the North of Scotland U20 ranks with Nairn's "development squad" - before graduating to the first team to play in the Highland Football League.

Not simply an exercise of adding games to their winter schedule, Finnie's men will be looking to compete for the North Caley trophies as well as focussing on their North of Scotland league commitments. The Saints should expect a strong challenge from a team who are among the favourites to win the North of Scotland U20 league. Among those to keep an eye on is 19 year old forward Matty Macleod, who made his debut for the first team last season. County have reported the following team news via their official site:

Craig McDermott, Sam Gordon and Jack W. Maclean are all out of the squad for the trip north with the first two unavailable due to work commitments while the latter has a knee injury, which forced him off at half-time in the cup tie at Inverurie. Calum Grant has been back training with the squad after spending the summer in America but he is also unavailable for this match while Craig Munro and Max Ewan are in the first team squad. Aaron Fraser is not quite ready to return and Struan Tweedie is struggling with a buttock injury.

At the Links, as ever we will have refreshments on sale, including tea, coffee, pies, hot dogs, crisps and sweets, as well as a match programme and raffle tickets for our half time draw.

The Man of the Match award for Saturday is sponsored by Glenmorangie.