There were just a handful of changes made to the side who played Alness United just before Christmas. Liam Rostock was recalled to the starting eleven in place of injured frontman Justin Rogers, who has since returned to Nairn St Ninian following the cancellation of his loan spell. Rory Patience took up the left back position, making way for Ryan Patterson who lined up next to Cammy Mackintosh and captain Jon Campbell in midfield.

St Duthus got things going early and on six minutes they had taken the lead. A neat run from Jon Campbell led to Jamie Skinner being played in on goal and the striker made no mistake with a shot sent into the far corner to make it 1-0. Campbell could have scored a goal of his own just five minutes later when Cammy Mackintosh floated a cross into his path, but the midfielder's resultant header sailed just over the bar.

With a quarter hour gone, Ryan Patterson showed early signs of placing his stamp on the game with a switch of play to the right hand side which gave Campbell the freedom to advance. A well timed through ball to Mackintosh played the Saints man in on goal, but he directed his effort over the bar. 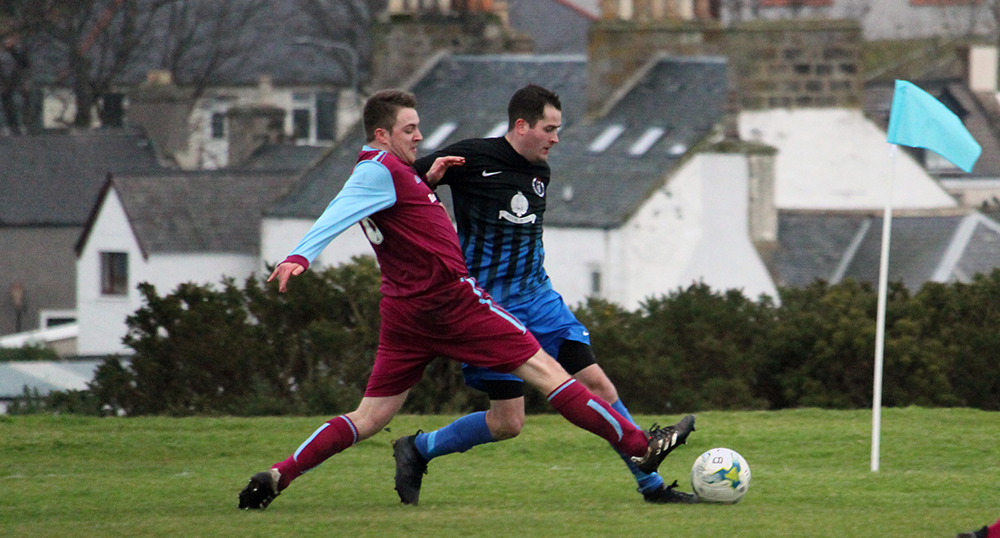 Bunillidh offered their first chance on 21 minutes when Billy Cairns was played in on goal, but a well timed challenge from Garry Macleod blocked the striker's angled drive. At the other end, Jon Campbell was fouled on the edge of the box after doing well to carry the ball through a busy midfield. From the set piece though, Campbell shot over.

On the 27 minute mark, a neat exchange on the right between Ben Bruce and Jamie Skinner led to the former zipping the ball across the face of the Bunillidh goal, just narrowly evading the on rushing Campbell. Just two minutes later, Bruce exploited the right flank once more when he sent the ball into the path of Liam Rostock, but with the ball under his feet, the Saints striker's effort was under strength and easily held by Cameron Yuill in the home nets.

Bruce continued to pester the Bunillidh back line and four minutes after the half hour he sent a deflected effort into the box which Cammy Mackintosh headed just over. Yuill's goal was beginning to lead a charmed life. A free kick was awarded soon after for a foul on Bruce on the edge of the box, but Ryan Patterson's curled set piece effort was held by Yuill.

Against the run of play, a ropey few minutes followed for St Duthus as they conceded a corner from a 50/50 challenge 30 yards from goal, the loose ball causing Steven Martin some difficulty as he had to turn the ball wide of the open net behind him. Bunillidh then equalised on 40 mins, and the goal arrived in freak fashion. Carrying the ball forward, midfield man Ethan Bews launched a speculative lob from 30 yards which sailed over Martin and into the St Duthus net.

From the restart, St Duthus were straight back up the park, and despite a good exchange between Jamie Skinner and Ryan Patterson on the left, the former's low cross into the six yard box failed to connect with a Saint.

A Craig Ross free kick found the target a minute later, but was held by Yuill - then - a momentary lapse saw Billy Cairns break clear on the counter and find the net for Bunillidh before the linesman flagged for offside.

The final action of the first half then saw Rory Patience screw a shot wide after a Liam Rostock throw in had been knocked into his path.

St Duthus started the second period with purpose and breaking into the box, Jon Campbell and Jamie Skinner were lining up to score as the bore down on Yuill, but the chance was cleared for a corner. From the corner, Campbell's glancing header sailed just over. On 50 minutes, a looped through ball was played into the path of Liam Rostock and the touchline had already started celebrating as it seemed that he'd found the far corner with a well placed shot, but Yuill got just enough of a touch on the ball to send it trundling wide of the post.

Rory Patience advanced into the area with purpose with 53 minutes gone, and after shooting towards goal the ball was deflected back into the path of Rostock, who turned into position to shoot low towards goal, but Yuill was at the ready again to save.

A few minutes of frenzied attack followed as St Duthus did everything but score. A ball into the box from Skinner was collected by Bruce and the Ullapool native laid the ball back to Patience on the edge of the box who in turn sent a rasping shot towards goal which rattled the crossbar and cannoned back into play. Many on the touchline were claiming that the ball had crossed the line. Just a minute later, Rostock had the ball in the net but his effort was ruled out for offside, and from a poorly distributed goal kick, the Saints did everything but score with a shot off the post, a chance blocked on the line and a ball sent wide of the post.

It seemed like it might be one of those afternoons when James Griffiths broke clear for Bunillidh, but disaster was averted when Martin easily held his tame effort. Alas, it was only a matter of time before St Duthus were back on the attack, and as substitutions were made, the Saints' greater fitness showed as they piled on the pressure.

A Ryan Patterson free kick was met by Cammy Mackintosh in the box but headed over, and just a minute later the latter cut the ball back into the box for Rostock who hit the ball first time, forcing Yuill to tip the chance just over his crossbar. The resultant corner was delivered into the six yard box and fell for Garry Macleod who rounded the keeper before slotting the ball goalwards - but the ball was cleared off the line. On 67 minutes, the sound of exasperation could be heard from the touchline as Rostock beat his man on the right before sending a cross in for Mackintosh who again headed over from five yards. 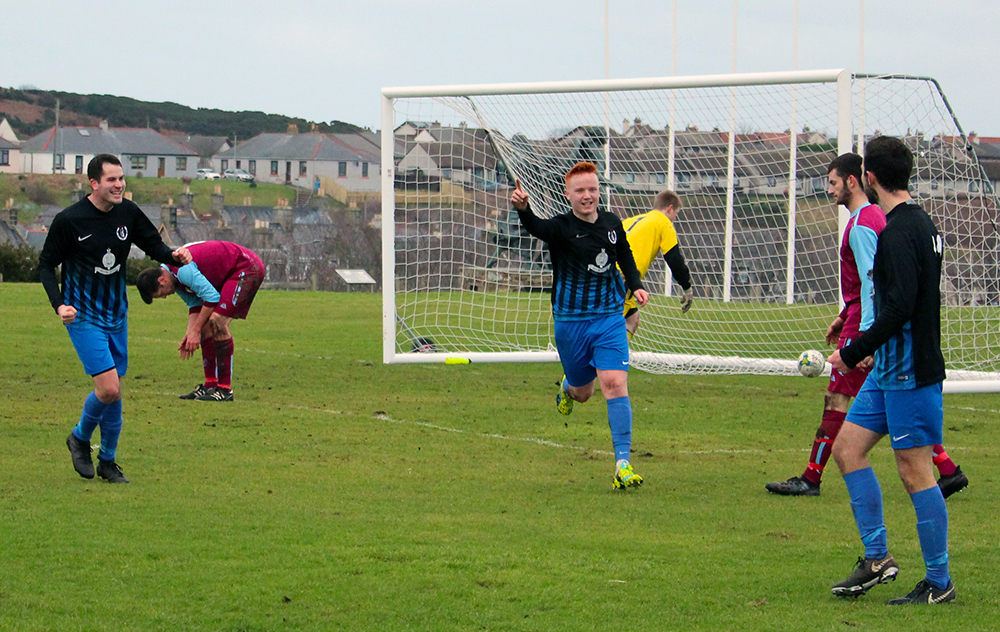 On 71 minutes, the breakthrough goal finally arrived. In possession on the right hand side, Ben Bruce crossed into the path of Ryan Patterson who sent a powerful drive beyond Yuill from 12 yards to make it 2-1. A sense of relief rent the air as Patterson almost burst the net with his goal, and it was only to be a matter of two minutes before the Saints extended their lead. A long ball from Craig Ross completely evaded Yuill as the Bunillidh stopper fresh aired his attempted clearance, and pouncing on the chance, Ben Bruce gladly tapped the ball home to make it 3-1.

Two minutes later it was 4-1. Coming forward to take a free kick some 35 yards from goal, centre half Craig Ross hit his set piece with power, keeping it both low and accurate enough to completely fox Yuill in the Bunillidh goal.

With the floodgates well and truly open, a fifth arrived on 77 minutes, Scott Miller doing well to find Rory Patience who sent a looping cross into the path of Finn As-Chainey, leaving the tall midfield man with the task of heading into the net. A minute later, the frustration in the Bunillidh ranks started to show, as scorer Ethan Bews was dismissed for a second yellow card.

Substitute Ken Morrison was next to add to the St Duthus tally, heading home from an As-Chainey cross. Two minutes later, Scott Miller was convinced he had scored when he tucked the ball beyond Yuill after being played in on goal - but the ball, which had cannoned off the inside stansion, bounced back into play and into the arms of Yuill. Despite protests, the pavilion side linesman stood by his claim that the whole ball had not crossed, leaving heads to be scratched in the Saints dugout.

As-Chainey showed his class with a great finish on 87 minutes to score the Saints' seventh goal. Collecting the ball on the left side along the byline, he sent a wicked shot across the face of goal which snuck in low at the far post.

A late goal from Cairns for the home side reduced the deficit to five goals, the Helmsdale man finishing well at the far post to beat Steven Martin.

With a first win of 2018 under their belt, St Duthus can immediately look forward to the semi final of the North Caledonian Cup, to be played next week at the Links, as they welcome Halkirk United. 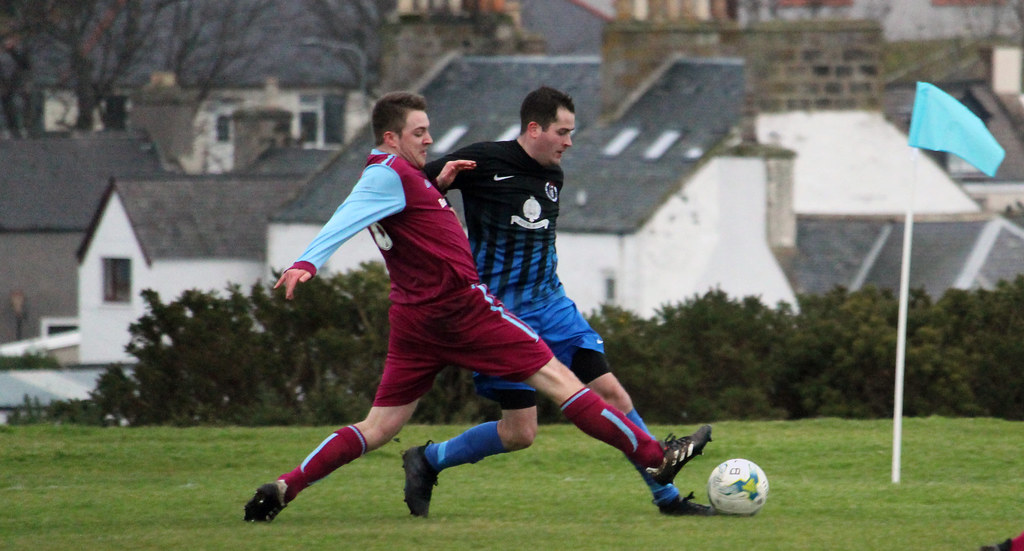