THE EASTER ROSS Derby spoils went the way of Invergordon this afternoon with just minutes remaining after a firey and entertaining game at the Links this afternoon. It was a disappointing outcome, as the Saints had been 2-1 up midway through the second half before the visitors hit back with two goals.

There were several changes made to the St Duthus side who last played earlier this month up in Helmsdale. New signing Barry Kenny replaced the absent Craig Ross at centre half, while Glenn Fell took his place in the squad on the subs bench. Scott Miller was recalled for the first time this year, coming in as number nine in favour of Jamie Skinner, while Finn As-Chainey replaced the departing Ben Bruce on the left side of the attack. Also absent, Garry Macleod was replaced by Ken Morrison.

The wind and the rain played its part throughout the game, but held off in the opening stages as both sides looked to gain an early advantage. A chance for Shaun Kerr was saved in the opening minute before Liam Rostock tested stand-in Invergordon keeper Robbie Ross with a low shot. Moments later, a quick Ken Morrison lay off found Ryan Patterson in space, but the midfielder's effort from the edge of the box was fired over the bar.

The opener arrived on six minutes for Invergordon. Breaking into the box, Kyle Maclean did well to cut the ball back to find Ryan Macleod in the area, and the visitors' top marksman made no mistake when he hit the ball first time to find the net. Just a minute later, Saints' captain Jon Campbell missed a great chance to equalise after bursting through the Invergordon defence; his clever run finished with a shot just wide of Ross's post.

With a quarter hour gone, Macleod looked to double his tally with a shot from distance but Steven Martin was alert to the strike, holding the ball high into his body. At the other end, Jack Mulgrew sent a shot wide of the post just moments later after finding space on the edge of the Saints' area.

Chasing a leveller, St Duthus enjoyed a spell of prolonged possession as the half continued, Jon Campbell and Cammy Mackintosh beginning to ask questions of Ross in the Invergordon goal. With half an hour gone, Campbell hit a powerful shot from 20 yards which forced Ross to spill the ball into the path of Liam Rostock, but the Saints' striker couldn't capitalise. On the counter, John Skinner did well to prevent a shot from Macleod which looked destined for the target. 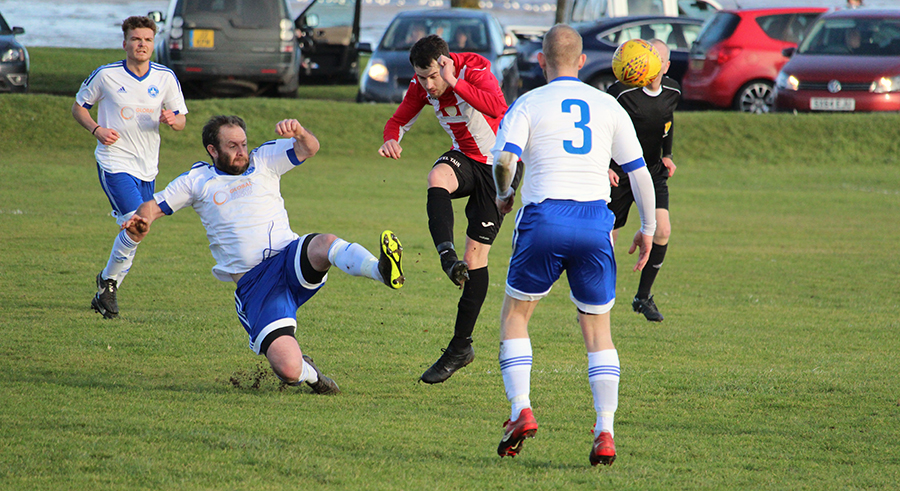 With ten minutes of the half remaining, the game was end-to-end. For Invergordon, a quick layoff from Shaun Kerr presented Macleod with a good chance which had to be deflected wide of the target - and just a moment later, Martin had to be at his best to tip a stinging shot from angle onto the crossbar.

The Saints earned a free kick outside the Invergordon with two minutes of the half left, and from a floated set piece, Scott Miller headed just over.

The Saints immediately hit back, and in excellent fashion, making it 1-1 minutes after the commencement of the second half. A long distribution from Martin was quickly played into the path of Finn As-Chainey who carried the ball into the Invergordon area and with authority, he sent the ball into the far corner of the net, leaving Ross helpless.

An unfortunate ankle injury to Invergordon's Kyle Maclean saw the midfield man having to withdraw on 53 minutes, leading to a prolonged stoppage in play.

Soon after the restart, Liam Rostock couldn't believe his misfortune when he sent a shot across the face of goal and it cannoned off the far upright before bouncing back up and into the relieved arms of Ross who had been left stranded. The Saints pressure continued as As-Chainey almost doubled his contribution with a chance moments later.

On 72 minutes, St Duthus took the lead. A wicked shot into the arms of Ross was spilled back into play - and quick to it, Cammy Mackintosh rifled the loose ball into the net to make it 2-1.

Just two minutes later though, hopes of a Saints win were dealt a blow as Invergordon restored parity - and the goal arrived from a corner. Delivered low along the ground, the ball evaded As-Chainey at the near post and scrambling the ball over the line was Jack Mulgrew to make it 2-2.

Both teams chased the winning goal as the game continued, and chances were arriving at both ends. Invergordon were largely kept at bay throughout the remaining stages, thanks in no small part to the game-long efforts of Barry Kenny who had blocked several chances for the visitors.

Disaster eventually struck in the 87th minute when a through ball found Ryan Macleod on the left hand side of goal, and closing in on Martin he slotted the ball into the far corner of the net to record a late winner for Invergordon.

The game was all but over with injury time remaining when As-Chainey was sent to ground inside the area in a challenge with Arron Christie, but referee John Nicolson waved play on, and the full time whistle duly followed.