TOMORROW, the Saints face their sternest challenge yet since their revival, as they travel to King George V Park to meet native club Golspie Sutherland in the North Caledonian Cup Final.

It is a trophy that the Saints last won in 1989, but first won in 1924 when they toppled Inverness side "Catch My Pal FC" in the Final to win their first "big" trophy. Some 94 years on from that historic day at Thistle Park, the Saints now look to acquire the first piece of silverware of the club's post-revival era.

An impressive run to the final saw St Duthus breeze past Bunillidh Thistle by 7 goals to 2 in Helmsdale, before they dumped Halkirk United out of the cup with a 4-1 semi final win at the Links. For Golspie, the route has taken place on home soil throughout - but they had to go via two of their title rivals, Invergordon and Thurso, in the process. Multi-time winners Golspie Sutherland will be looking to make it three in a row in the North Caledonian Cup but for the Saints, it will be all about going one better than their last try in April last year, when they lost out 2-1 on penalties to Orkney in the Jock Mackay Cup Final at Invergordon. Their recent form will have given them encouragement though, having recorded 4 wins in their last 6 games -- but the prospect of a Golspie Sutherland side who are challenging for the league will have to be met with the Tain side's best efforts. Stuart Sutherland's men have proved something of a bogey side for St Duthus since their return to the North Caledonian League, despite some close encounters. Like all hoodoos however, ultimately they all must come to an end.

A hot topic in midweek has been the Cup Final venue. Originally announced for Dudgeon Park, Brora, the game was switched to Golspie's ground on Wednesday. Despite the Sutherland side gaining home advantage, St Duthus manager Stuart Ross has remained in bouyant and confident mood.

"We have a full squad to pick from aside from those with injuries and work commitments, Adam MacDonald and Martyn Farquhar the notable absentees. We trained on Saturday and in midweek and the boys are in great spirits, all ready to fight for their place in the squad. We know it'll be a tough game up there, but we'll have to be on top of our game anyway against a Golspie side who will be out and out favourites for it. It's a one off game, we know that - and anything can happen - we just need to go into the game with the right attitude. I'm more than convinced after speaking to the boys this week that they are all fully focussed and have their minds in the right place for this final."

Saints supporters are encouraged to come along and support the lads for what will be unquestionably their biggest game of this season. Spaces remain on the ST Duthus club bus if anyone wishes to travel with the team and committee. The game kicks off at 2pm, with penalties required if the game goes to a draw.

Supporters are reminded that no alcohol will be permitted in the grounds of King George V Park. 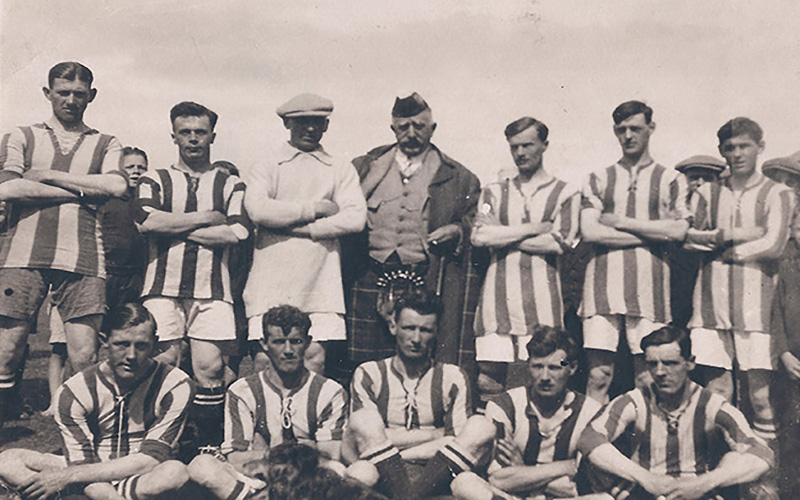 Winners of the North of Scotland Junior Cup (now known as the North Caledonian Cup) in 1924-25.