THE SAINTS have secured a place in the Jock Mackay Cup semi-final thanks to a 1-0 win over Shetland at the Links this afternoon. A goal three minutes from time was all that was required to separate the sides in the end as both teams entertained throughout a busy and hard fought affair.

Several player absences left Stuart Ross with only 14 players for matchday, including trialist Bartek Sosnowski. Sam Beeston made his first start of the season replacing the suspended Ewan Ross, while Ken Morrison stepped back into the starting lineup in place of captain Jon Campbell. Ryan Patterson was recalled in a left midfield role while Liam Rostock missed out due to injury. Louis Webster and Paul Cowie were also recalled, both taking places on the bench.

There were plenty of signs in the early going that the game was going to be a tightly contested affair. Shetland had the first chance of the game after 7 minutes when Calvin Leask tested Stevie Martin with a low drive after receiving a lay off, but the ball was held well by the Saints stopper. Two minutes later, Ryan Patterson created an opportunity with a long throw for Cammy Mackintosh who headed over Shetland keeper Grant Wood and the crossbar.

The game continued in an end to end fashion in the early stages, and most notably Finn As-Chainey was unlucky not to test Wood with a header on 18 minutes after Ryan Patterson had sent a first time cross into the box. 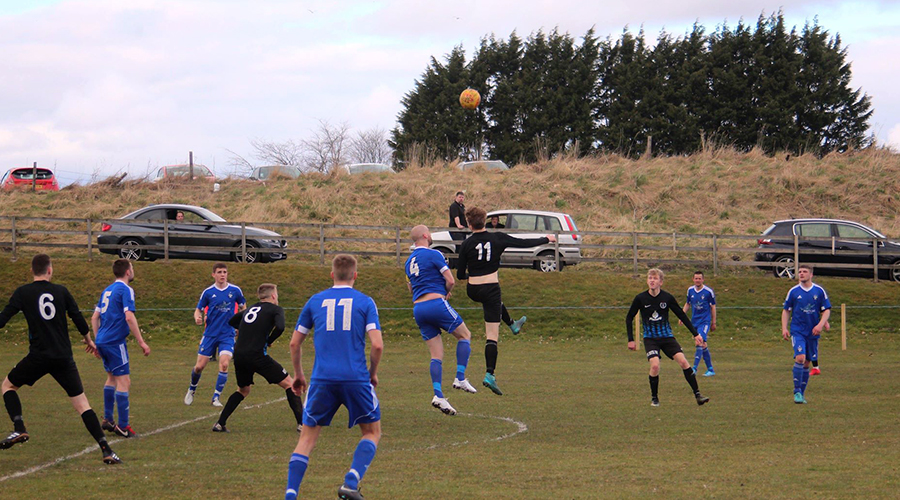 With half an hour gone, an aerial ball reached Shetland's Lorne McNiven at the far post but his headed effort flew over the bar, as the score remained 0-0. The chance served as a warning to the Saints' defensive line, who had otherwise kept their Island visitors quiet throughout the first half. Shortly before the break, a chance for Joe Sutherland flew wide.

The Saints touchline were left frustrated after Cammy Mackintosh had been played in on goal with five minutes of the half remaining, but assistant referee Malcolm Macleod adjudged the midfielder to have been in an offside position.

Jamie Skinner came close to opening the scoring on 56 minutes when he received the ball in the box before turning to fashion a shot on the turn, but Wood was up to the challenge, doing well to get down low to collect Skinner's shot from close range.

On the hour mark, a short corner exchange between Ryan Patterson and Finn As-Chainey saw the latter send the ball into the box for Cammy Mackintosh, but the Saints man directed his headed effort just over the bar. A minute later, good footwork from Jamie Skinner saw him find space to lay the ball back to As-Chainey, but the winger's effort was saved and turned away for a corner.

Bursting forward from the centre half position, Craig Ross found himself with a chance to score on 75 minutes but missed the target with his resultant effort.

For Shetland, Gary Sutherland was sent clear down the right side on 85 minutes and it seemed as though the Islands man had presented himself with the straight forward task of slotting the ball home, but Martin had other ideas and after getting down low he produced a great block to deny the Shetland frontman.

The winner, instead, was reserved for the homesters. With three minutes of normal time remaining, Ken Morrison produced a bit of a magic with a stunning strike rom 25 yards out. Collecting the ball from Louis Webster, he found space before sending the ball sailing into the top corner, beyond Wood with authority. The lead was a just reward for an excellent second half performance from St Duthus.

Almost instantly after, Morrison could have doubled his lead when he only narrowly missed a cross sent into the box that needed just a glancing header to beat the keeper. Five minutes of injury time followed, and the Saints expertly saw the match out without incident, securing their place in the Jock Mackay Cup semi-final.