GOALKEEPER Alister Matheson is back in a Tain jersey for the first time in nine years, having signed up with St Duthus for the 2018-19 season this past week.

The 28 year old last played in Tain for Tain Thistle FC during the club's short two season spell in the North Caledonian League at the age of nineteen in 2009. He signs up for St Duthus some nine years later as an accomplished custodian, having spent several seasons with Highland Football League side Strathspey Thistle and short spells with Invergordon and Balintore - and he is ready now to stake his claim to the #1 shirt for Saints.

"It's great to join up with the club. I think I can bring some experience and a voice to the team. It is great to see young players getting the chance to come on and improve themselves the way they do at St Duthus, and I hope I can be a factor in helping them come on further. As far as the team as a whole goes, it would be great to add another trophy this season, or even reach a final. I'm always keen to keep learning and to be as consistent as possible doing my part in what I think will be a successful season for the Saints."

The former Clachnacuddin youth stopper made his debut for the Saints in this past Saturday's match against Alness United following a short trial spell in training and is expected to play his first game at the Links this coming weekend. 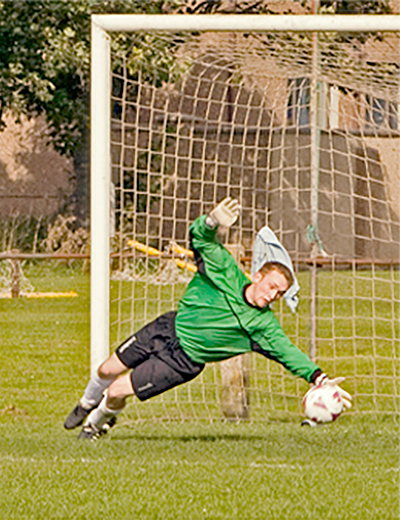 Ali Matheson in action for Tain Thistle FC in 2009.