UNDER the lights at Station Park, the Saints overcame a 2-0 half time deficit to record a 4-2 win over Nairn County U20s last night, thanks to a dominant second half display and some scintillating football in a friendly match that was played in hearty and competitive spirit.

Missing from Saturday's eleven were defenders Barry Kenny and Garry Macleod, as well as substitutes Ewan and Will Ross. Paul Cowie and Sam Beeston were recalled to the starting eleven, while Jamie Skinner returned from injury to take a place on the bench. He was joined by Martyn Farquhar, Alan Davis and trialists Liam Mcleod and Lewis Webster.

It quickly became apparent that neither side were about to take the evening's "friendly" match lightly, as both sides looked to gain an early advantage - and it was the Saints who were first to threaten. A neat through ball after just five minutes found the in-form Scott Miller through on goal, but the striker's lobbed effort went wide of the target. At the other end, Steven Martin reacted well to block a shot to his right with a superb save to keep out a Nick Highet strike.

It was honours even in the possession stakes as both sides were passing the ball well and looking for a breakthrough, and from a long ball over the top of Paul Cowie and John Skinner, Nairn snatched the opener after 23 minutes. Clean through, first team regular Jamie Mackay showed his experience by keeping a cool head while one on one with Steven Martin, and slotted home to make it 1-0. 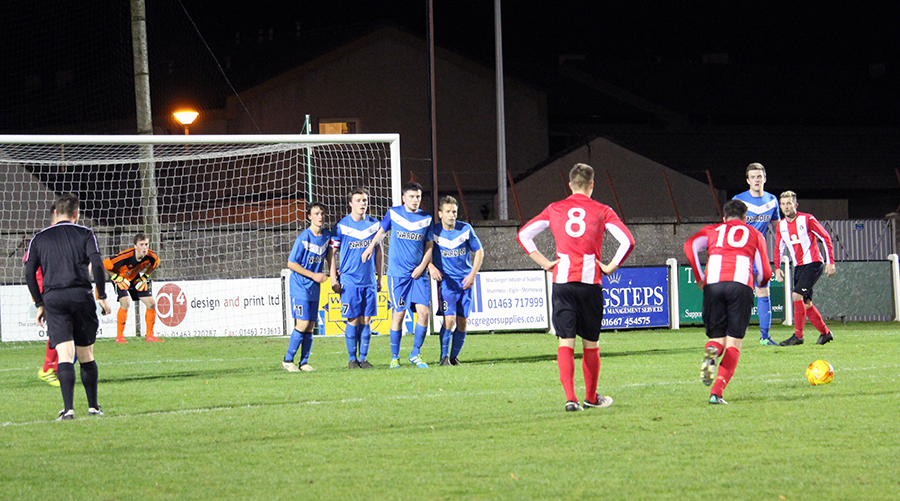 The Saints' midfield workhorse Ken Morrison was unlucky not to equalise shortly after when his headed effort looped just over the bar, and in goal for Nairn, Fraser Wilkie had to produce a good stop moments later from the same player when he side footed the ball towards goal.

Receiving a pass from Liam Rostock on the left edge of the box, Miller offered up another shot on goal, but this time his effort was held by Wilkie. Rostock thought he had scored himself with seven minutes to go when he curled an effort past the far post, but the next goal was reserved for Nairn, as their trialist midfielder Andrew Miller, who left the Saints last month, hammered the ball past Steven Martin to make it 2-0.

St Duthus re-emerged for the second half the more determined of the two sides, and it was no surprise when Scott Miller struck on 52 minutes to reduce the deficit, drilling the ball past Wilkie after good work from Cammy Mackintosh and Liam Rostock. The goal followed great movement from the Saints midfield, who were the keeping the ball on the ground from the back to the front. The hard working Jon Campbell showed his worth time and again in the middle of the park, and Ken Morrison again showed great presence.

The goal appeared to rock the home side, who were on the back foot from that point forward, and the Saints displayed great persistence to retain possession and create some attractive passages of attacking play in the minutes that followed. Miller was unlucky not to snatch an equaliser and double his tally when he found himself through on goal on the hour mark, but his effort from ten yards flew just wide. Liam Rostock was unlucky with an effort soon after which Wilkie had to save at his near post.

Morrison shot over the bar with an opportunity from fifteen yards with a quarter hour remaining and some great blocking from the Nairn rearguard kept the wolves from the door, albeit only temporarily, as the Saints kept knocking. From a rare counter attack, Nairn threatened on 81 minutes when Matty Macleod played Joe Cuthbert through on goal before the latter shaved the crossbar with a bending effort.

But the Saints still had the upper hand, and the visitors' perseverance finally paid off with eight minutes remaining. Substitute Alan Davis was the man to net, having collected a pass from fellow sub Louis Webster before sending the ball past Wilkie to level the scores. The goal was a deserved reward for a fantastic second half display, which warranted at least a draw.

Louis Webster turned goalscorer on 87 minutes after Davis had whipped a left footed cross into the box and, reacting quickly, the former sent the ball past Wilkie with a first time volley to give the Saints the lead for the first time in the game.

Webster completed a brilliant substitute stint with a second goal at the death after the impressive Sam Beeston had rattled the underside of the crossbar with a curling effort following a clever run, leaving the winger to rush forward and claim the simplest of tap ins.