A GOAL twenty minutes from time was all that could seperate the sides in Saturday's derby between St Duthus and Invergordon, as the curtain fell on league action at the Links.

In the absence of defenders Barry Kenny and Will Ross, Lewis Ross stepped into the back three alongside John Skinner and Garry Macleod, while Jon Campbell took up a forward position, freeing up Liam Mcleod to drop into the midfield alongside the ever present Cammy Mackintosh and Ken Morrison.

The Saints started as the more energetic of the two sides and quickly began to create chances, Jamie Skinner sending a rasping effort towards goal which Stephen Campbell had to turn away to safety.

It was all Saints when Jon Campbell had his head in his hands on the quarter hour mark after he was played in on goal for what seemed like it would be the opener. Unfortunately, Campbell opted to attempt a lob over Stephen Campbell and his effort was thwarted easily by the away side's custodian. 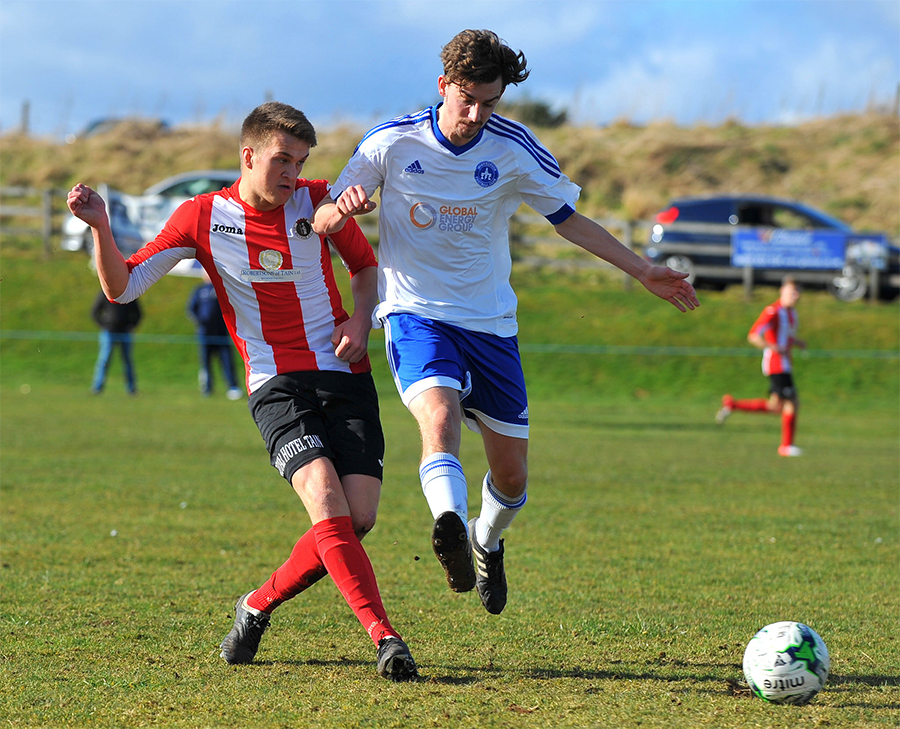 At the other end, a point blank header from Riccardo Invernizzi forced Steven Martin to make a stunning stop twenty minutes into the match. Had Martin not been up to the task, the Saints would have been saved anyway by an offside call. Another Invernizzi header moments later was saved low at Martin's bottom left hand corner, as Invergordon started to come into the game.

A chance for Liam Mcleod flew wide of Stephen Campbell's post just before referee John Nicolson blew for a free kick for a foul on Jon Campbell. The felled Saint was unlucky when he sent a resultant set piece low and wide of goal, missing a gaping bottom corner which had been left exposed by the Invergordon wall.

The half time whistle came all too soon for a Saints side who were enjoying the lion's share of possession and the better chances during a fiercly contested first half.

On another day, Invergordon's Craig Munro would have found the net with a well taken free kick from 25 yards ten minutes into the second period, but up to the task was Steven Martin who tipped the curling effort up and over the bar with another cracking save.

The league leaders were now hitting their stride and as the ball flew from end to end they began to place pressure on the Saints back line. In goal, Martin earned his stripes with a couple of good blocks, first from Shaun Kerr and then Niall Docherty who both found themselves clean through on the Saints goal.

A moment of quality followed on 70 minutes when Invergordon broke the deadlock to go into the lead. With his back to goal, Shaun Kerr laid the ball to substitute Mark Lamont on the edge of the eighteen yard box and the striker sent the ball low and beyond Martin to make it 1-0. 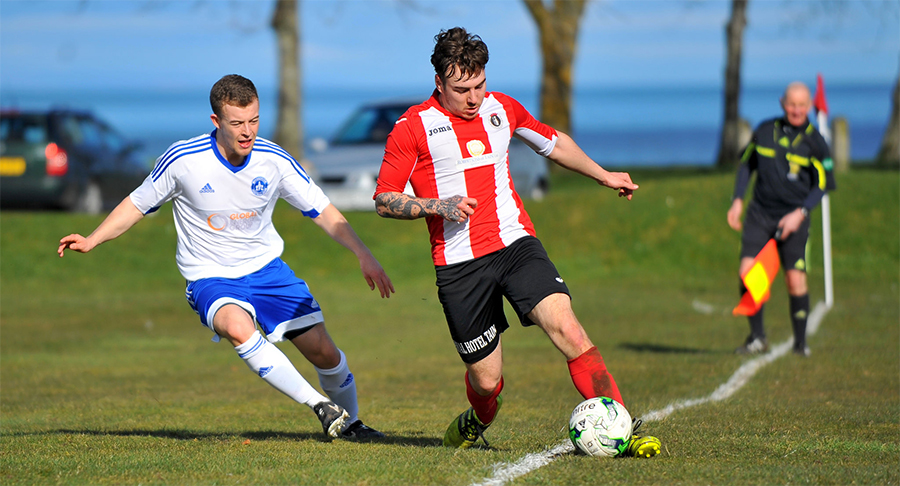 The Saints weren't beaten yet and it looked as though Liam Mcleod may have found the equaliser when he was played in on goal after a blistering run from Ken Morrison, but the midfielder sent the ball high and wide from inside the six yard box.

Soon after, Jamie Skinner attempted to outfox Campbell with a looping shot from fully 30 yards out, but the effort sailed just over the bar.

A series of free kicks and corners for the Saints played out the closing stages as they chased an equaliser, but despite the best efforts of Ewan Ross, who produced some excellent delivery, and Joe Sutherland, whose tireless running was very worth of applause, the victors on the day were Invergordon. Although, in the midst a heated finale, Invergordon's Niall Docherty found himself dismissed for a second bookable offence after he kicked the ball away following a foul.

The visitors celebrated their win with exuberant cheers - as you'd expect for a side closing in on the league title, but for the losing Saints there were many reasons to be cheerful, Stuart Ross and his men having given such a daring display against a side who many believe to be the champions-elect. As has been the case many times this season, there were many signs that the Saints are improving with every game and are a team to be reckoned with.

For St Duthus, the league season is almost over, save for the remaining chance for the Saints to jump to fifth place by defeating Golspie Sutherland on the 25th of this month. The focus next week will turn to the quarter final of the Jock Mackay Cup, when the Saints will welcome Alness to the Links for the third time this season.