A SEMI FINAL place in the Jock Mackay Memorial Cup now awaits St Duthus, thanks to a confident and comfortable 3-1 win over neighbouring Alness United yesterday.

With only a handful of absences to speak of, St Duthus fielded a strong side for the tie, as Ewan Ross reclaimed a first eleven shirt, stepping in for Joe Sutherland as the only change to the starting eleven named against Invergordon last weekend.

Forward man Jamie Skinner offered the first chance at goal after he collected a layoff and shot wide of the far post with just two minutes on the clock. The chance set the tone for a first half that was to be dominated by the Saints.

Garry Macleod was unlucky not to open the scoring after collecting the ball on his chest and battling well to burst past the Alness back line to force a save from United 'keeper Adam Carter. Just moments later, it looked as though Cammy Mackintosh had broken the deadlock when he collected a pass from Jon Campbell but the midfield man rattled the crossbar with his powerful shot.

The deadlock was broken after 22 minutes when Lewis Ross carried the ball from defence before playing Jon Campbell in on goal and the forward slotted the ball into the bottom corner with ease. The goal was a just reward for an opening period of continued St Duthus pressure.

Lewis Ross was unlucky not to double the Saints' lead two minutes later when he forced a save from Carter at his near post with a bullet header after Garry Macleod had nodded a Jon Campbell corner across goal.

Adam MacDonald showed great determination when he chased down a loose ball and then won a 50/50 ball in a challenge with Carter, but fortunately for the Alness stopper, the ball flew just wide of the open goal.

Jon Campbell tested Carter with half an hour gone after a neat pass from Liam Mcleod, and a minute later Alness offered their first chance on goal with a shot from Shaun Grant, easily held by Steven Martin. Four minutes later, Garry Macleod threatened from a corner once again, controlling the ball and volleying the the ball into an outstretched Carter. At the other end, Steven Martin had to be alive when a defensive miscommunication forced him to show off some quick feet, chipping the ball to safety. 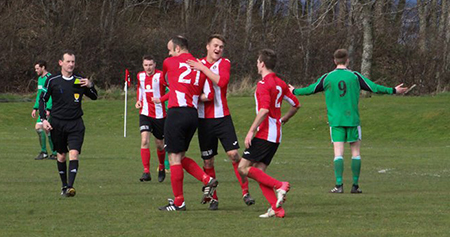 It looked sure to be 2-0 with five minutes of the half remaining when Campbell and Mackintosh combined once again, but this time the latter's effort flew just wide of the target. The second was reserved for Lewis Ross who stole the show on 43 minutes with a spectacular goal. Once again carrying the ball from the back, Ross stopped forty yards from goal and sent a powerful shot over the top of the Alness defence and beyond the reach of Carter, leaving the stopper with no chance. A goal of the season candidate if ever there was one.

Adam MacDonald showed great determination three minutes after the restart when he won the ball on the touchline before sending a ball across goal, but meeting the chance first time, Ken Morrison's shot hit the woodwork, as the ball cannoned off the post and flew wide for a goal kick.

Alness United came back into the game as the second half progressed, and the Saints had to deal with some dangerous balls across the face of goal, the pace of Peter Kelly proving a continued threat.

Jon Campbell, who continued to impress in his new forward role, did well to burst clear of two Alness defenders before being fouled, and shortly after, it was Cammy Mackintosh who was felled five yards outside the box after breaking clear.

Substitute Liam Hutchinson got involved in the thick of things for Alness up top and with a quarter hour remaining the Saints avoided a scare when the United man sent a shot across Martin, but the chance flew just wide. Ali Mackinnon, who had been felled moments earlier after taking a ball to the nether regions, was next to shoot at the Tain goal, but his effort flew just wide.

With ten minutes remaining, Alness reduced the deficit and it was thanks to well placed free kick from Liam Hutchinson who curled the ball into the far corner beyond the reach of a diving Martin from 25 yards.

Louis Webster was unlucky not to snatch a third goal for the Saints with just a few minutes remaining when he leapt high to nod the ball goalward, but with the ball just a little too high, Carter was able to collect the chance.

Any doubts the Saints had about securing their place in the semi final were put to bed eight minutes later though, when substitute Scott Miller adding the finish touch to a series of passes in the eighteen yard box, tucking the ball under Carter with composure to net his eighth goal of the season.

The Saints will immediately focus their attentions on semi final opponents Thurso as they prepare to travel north to the Dammies next weekend, in the hope that they can round off their season with a place in the Jock Mackay cup final.