A CROWD of over three hundred people descended upon the Links yesterday to witness St Duthus versus Brora Rangers in the first round of the North of Scotland Cup. An entertaining first half saw Brora edge a 1-0 lead at the break before fitness and quality ultimately told, as the Cattachs ran out clear and decisive winners.

St Duthus faced up to the absence of a number of experienced players. It started in goal with Steven Martin missing and trialist goalkeeper Connor Hall stepping in between the sticks, having enjoyed just one training session with the team. Meanwhile, seasoned campaigners Lewis Ross and Martyn Farquhar also missed out due to work commitments following excellent performances from both in Caithness last weekend. Returning to the side, however, was Cammy Mackintosh.

Ross Tokely named a strong Brora Rangers eleven for the tie, fresh from a 5-0 win over Formartine United last weekend. Most notably, Balintore native Steven Ross started up front for the away side, while Will Counsell replaced Ross Munro in goal.

The Dunoons of Tain Pipe Band piped both sides on to the field of play before kick off, followed by a line of handshakes between both sets of players, which drew applause from the crowd.

From the word go, the Saints showed that they were not just here to make up the numbers and came out of the traps with great determination. With the main question before the match being just how long the Saints could keep Brora out for, it was with some surprise to those in attendance that for most of the first half, the Saints more than held their own and could even have been ahead. With 19 minutes gone, the St Duthus touchline were left befuddled after referee Stephen McDade flashed a yellow card at Will Ross for simulation when the full back was visibly brought down in the penalty area.

Jamie Skinner had been unlucky with an angled effort moments later as the Saints were making a fair fist of it, Jon Campbell in the midfield showing great determination on the ball. At the other end though, Connor Hall was proving a more than capable deputy for the day, producing a number of key saves throughout the first half. The opener eventually arrived courtesy of Brora's in form goal machine, Kyle Macleod, walking a loose ball into the net on 25 minutes.

Undeterred, St Duthus kept the deficit at just one goal going in at the interval. The Brora side were undoubtedly in control and had kept the Tain goal busy - but the Saints can be commended for their resilience. The worry for Stuart Ross and his Saints side was a left thigh strain which Hall had suffered early in the half, becoming more apparent when the keeper was seen to be limping from the field at the break.

The second half kicked off in a similar fashion to the end of the first, with the Saints defending doggedly and keen to break forward on the counter. Hall was again called into action to produce a stunning save three minutes in, but any hopes of an equaliser were dashed in the 50th minute when Andrew Greig made it 2-0. And thus, a five minute goal glut began, and any chance the Saints had of a comeback was left disintegrated after four clinical and brilliant goals in quick succession; Steven Ross scoring goals either side of another for Greig.

A clash of heads stopped play for three minutes, following a mid-air collision between Ken Morrison and Colin Williamson. This led to the latter being substituted before being later admitted to A&E with concussion concerns. 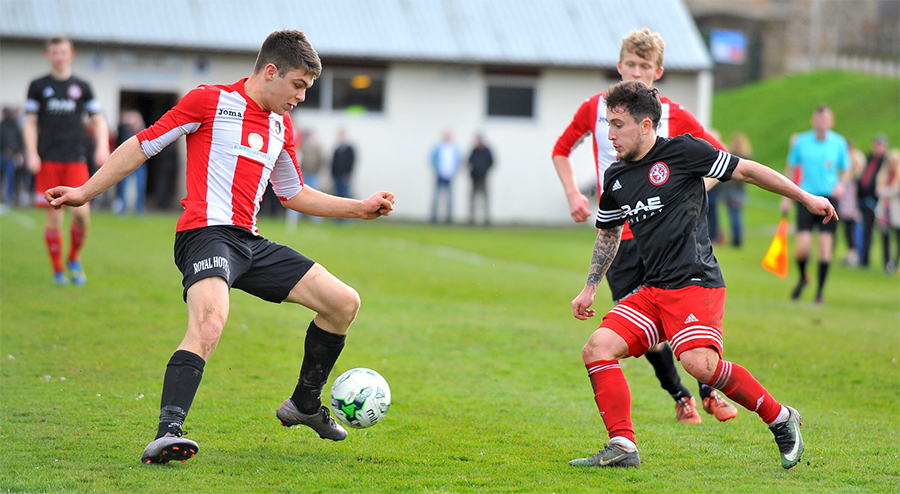 Twenty minutes followed before Brora extended their lead further, despite a number of shots off the post and chances wide of target. A sixth then arrived for substitute Scott Graham, before a ball across the face of goal was deflected into the net by captain John Skinner to make it seven.

Saints' sub Liam Mcleod offered something of a reply for the Saints on 85 minutes with a shot just over the bar, but with just three minutes remaining, Zander Sutherland made it eight and Steven Ross secured his hat-trick with the final goal of the afternoon.

At the death, Will Ross should have collected some recompense for his earlier injustice after breaking free on goal, but the wing back could only hit the post with his effort. Alas, that was to the last of the action and a long second half for St Duthus came to an end.

The St Duthus committee wish to offer their sincere thanks to everyone at Brora Rangers for the friendly manner in which the game was played and for the support that their supporters brought to the Links. Chairperson Niall Harkiss was full of praise after the game.

It was an honour to be able to welcome a high profile side like Brora Rangers to the Links, and even more fitting still for it to be our final home game of the season. The day has served as a great fundraiser for us, and while it is clear that Brora Rangers are a step (or two) ahead of us football wise, we hope that everyone who came to visit the Links today can say they were looked after well and enjoyed the day.

Post-match at the Royal Hotel, St Duthus captain John Skinner was presented with a generous gift from Brora Rangers FC in the form of a glass memento, engraved to mark the occasion.

Everyone at St Duthus FC wishes to thank match sponsor Scott Paton of Tain Carpentry and Joinery for their contribution to the day.