A PENALTY shootout settled the final of the Jock Mackay Memorial Cup yesterday in Invergordon as Orkney narrowly won with a spot kicks victory following a 1-1 full time scoreline. In what turned out to be a perfect example of a game of two halves, St Duthus took a first half lead through top scorer Scott Miller before Orkney's Kyle Drever levelled with twenty minutes remaining of the second half. In windy conditions, a shootout filled with misses and saves ultimately saw Orkney emerge as the victors by 2 penalties to 1.

Several changes were made to the team that lost 4-2 to Golspie last week. Ewan Ross and Adam MacDonald adopted familiar wing backs roles, while Garry Macleod returned to the starting eleven to make up a back three alongside captain John Skinner and Will Ross. Dropping out of the squad was Louis Webster, while Liam Rostock, returning from travel, took a place up front alongside Scott Miller, who also returned to action having missed last week's trip to Golspie. Craig Sutherland made way and dropped to the bench. The midfield three of Mackintosh, Campbell and Morrison remained unchanged.

Any concerns that Orkney had before the game about the fitness of captain DJ Moffat must have been quelled as the defender started for the island side, and an otherwise familiar Orcadian eleven was named for the game. In the absence of manager Charlie Alway, Colin Kirkpatrick took his place in the dugout.

The teams were piped onto the pitch, in a tradition that has been a common theme now for all three of the meetings between the Saints and Orkney this season.

The first offering of the game fell to Orkney forward Mark Berry when he found himself on the receiving end of a long ball in the fifth minute, but his mishit shot flew well wide of goal. Minutes later, a cross from Ken Morrison was fumbled by Cameron McConnachie in the Orkney goal, but neither Scott Miller or Jon Campbell could send the loose ball goalward with the net gaping. Shortly after, Saints' Ewan Ross was first to shoot on goal after doing well to hold on to the ball inside the area, before firing towards goal from ten yards, McConnachie doing well to parry the shot before it was cleared to safety.

A quarter hour had elapsed when it appeared as though the Saints had taken the lead. Breaking clear, Ken Morrison shot towards goal with what looked like an curling effort bound for the top corner, but the ball hit the highest point of the upright and flew back into play, drawing gasps from the crowd before Ewan Ross hit a speculative effort from the edge of the box which was easily held. The Saints were enjoying a period of command, winning several midfield battles, and it seemed that more chances were sure to come. In particular, the tireless work of Jon Campbell in the Saints' midfield was proving increasingly difficult for the Orkney defence to deal with. 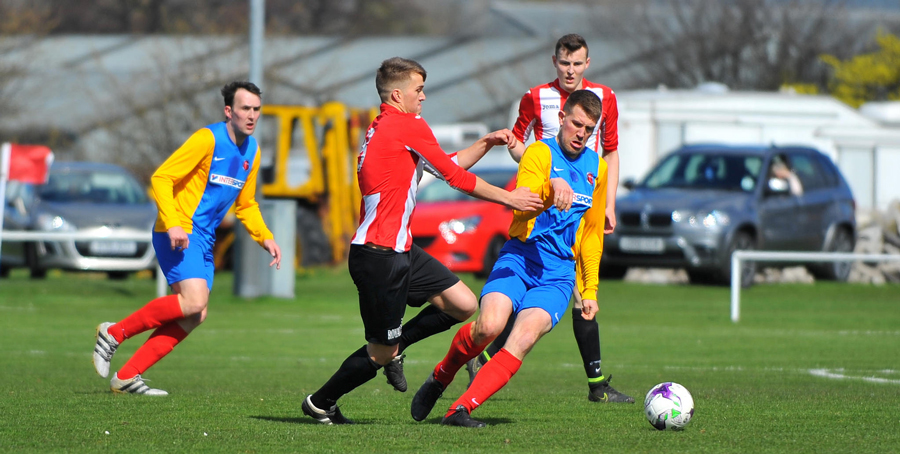 On the half hour mark, Orkney were given a reprieve when a set piece let to Kyle Drever heading goalward. From this point, Orkney began to come back into the game and moments later, the same player saw a shot on goal deflected over and the bar and from the resultant corner a header was directed over the bar.

The opener arrived after 34 minutes and it was for St Duthus. Nodding the ball into the area after a throw, Ken Morrison found Scott Miller in the box, who in turn headed the ball off the far post before promptly sticking the rebound past McConnachie to make it 1-0. Cheers from the Saints' side of the ground rent the air as the Tain side's top marksman notched his 11th of the season to give them a cup final lead.

With five minutes of the first half remaining, Mark Berry rattled the crossbar with a strike from twelve yards, leaving Saints supporters with their hearts in their mouths, but resilient defending and quick reactions saw the ball cleared to safety. A scuffle ensued at the other end when Scott Miller became entangled with Kyle Drever resulting in both players receiving a caution. 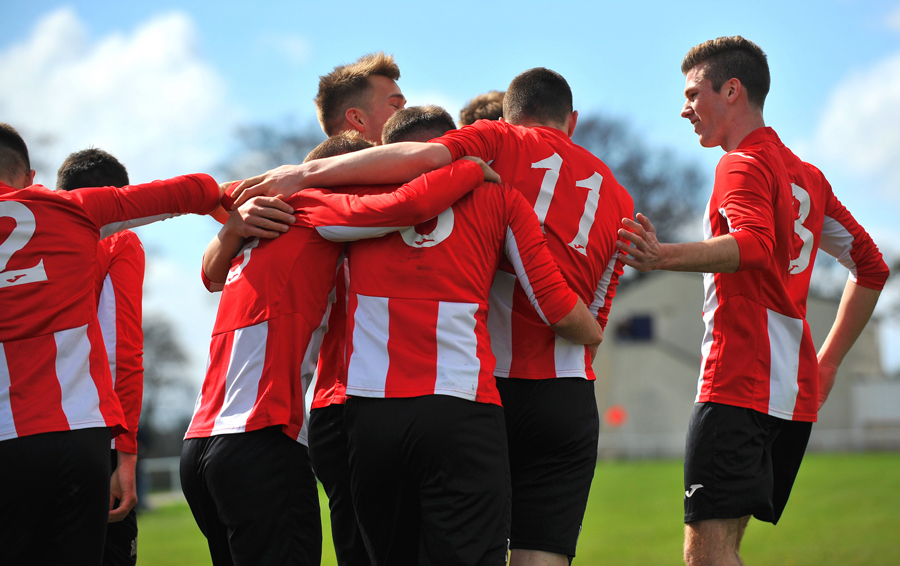 Jon Campbell continued to look like the Saints' greatest threat, and on 50 minutes a bursting 30 yard run led the midfielder playing Scott Miller in on goal, but the linesman on the near side flagged for offside. Minutes later, Garry Macleod had to be quick to react to a ball played across the Saints goal, clearing the ball to safety, as Orkney continued in search of an equaliser.

A clever interception from Jon Campbell on the hour mark saw the Saints' number six play a quick one two with Ewan Ross before looping the ball into the path of Liam Rostock who sent a lob over the top of McConnachie - but the Orkney stopper produced a superb save to prevent a goal that would have given the Saints a 2-0 lead. Scott Miller, from the edge of the box, sent the rebound high and wide.

As Orkney continued to pile on the pressure with a series of forward thinking substitutions, the safe hands of Steven Martin in the St Duthus goal and stout defending of messrs Will Ross, Garry Macleod and John Skinner were becoming increasingly important and for 70 minutes of the game the clean sheet was on. In the end, an accidental defensive header across the face of goal from a Mark Berry cross handed Orkney the equaliser they were looking for, leaving Kyle Drever with the easy task of rifling the ball into the top corner. At 1-1, the game was now wide open with twenty minutes remaining.

Mark Berry very nearly netted a second for Orkney moments later, and were it not for a superb save from Martin at his near post, the Orcadians would have been 2-1 ahead. A looping ball at the other end from Ewan Ross was met by Cameron Mackintosh who nodded the ball to Ken Morrison and the latter hit the upright with a sweeping shot on the turn, just as the flag blew for offside.

A superb interception from Garry Macleod prevented Orkney from taking the lead with eight minutes remaining after Thorfinn Stout found himself through on goal from a long ball, Ewan Ross eventually clearing the ball to safety, as the Orkney pressure kept coming. Substitute Jack Paterson offered the last chance of the match with a long range shot which Martin easily held, and with four minutes of injury time played, referee Gavin Dearie called time on the match and the inevitable cruelty of penalty kicks was confirmed.

The Saints shot first through Adam MacDonald, and perhaps hampered by the wind, the wing back agonisingly fired just over the bar. Orkney sub Craig Gillian missed the next penalty with an effort almost identical to that of MacDonald's, but any reprieve the Saints had received was quickly eradicated when Cameron McConnachie saved Cammy Mackintosh's low effort. Graeme Horne gave Orkney a 1-0 lead in the shootout, despite Steven Martin getting a hand to the corner bound kick, but Ken Morrison, showing great composure, promptly levelled the scores with a cooly placed effort into the corner. 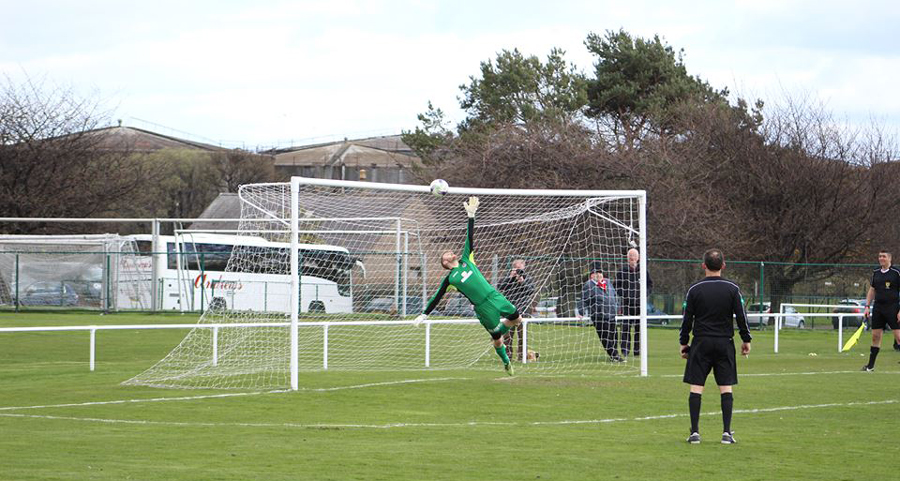 Chris Simpson made no mistake with his penalty to give Orkney a 2-1 lead - and expectedly so as the Orcadian's usual penalty taker. It seemed that any hopes the Saints still had left were all but dashed though, when star midfield man Jon Campbell shot over with his kick. One final lifeline was recieved when Steven Martin pulled off the save of the match to prevent Mark Berry from finding the top corner. The moment of heartbreak though was ultimately saved for Saints captain John Skinner, who saw his placed effort cannon off the crossbar, confirming Orkney as the winners of the Jock Mackay Memorial Cup for 2016-17.

Post-match, both teams applauded the efforts of hosts Invergordon as North Caledonian League secretary Iain Whitehead gave thanks to those who had sponsored the final and made it possible. St Duthus keeper Steven Martin was named as man of the match by the main sponsor, who applauded Orkney for their achievement, before the Island men were awarded their winners trophies and the cup for the first time.

Both sets of players convened to the Marine Hotel for soup, sausage rolls and some celebratory (and commiseratory) drinks, before the Orkney men were wished well on their travels for the 6.30pm ferry at Gill's Bay. For the Saints, it was a journey home along the A9 back to the Royal Hotel, where they began to focus on celebrating a season of revival and the building of a team who have performed way beyond all expectation.

"The boys were fantastic today. We discussed in the dressing room before, and in the lead up to the game in the week before, what we needed to do and they carried it out as discussed. We did superbly well for the first seventy minutes of the game, and against a really good side in Orkney we probably let them back in for that last twenty. We can look back on the first half and think that we probably could have been a couple of goals ahead at the break, and for the the early stages of the second half we could have added to that. But it's been the story quite often this season that we've struggled to keep the momentum up for the ninety minutes, and not put chances away, but we continue to learn and evolve, and all in all, a draw was a fair result at the end. Penalties is what it is, but someone has to win it, and we congratulate Orkney on their win."

"In the grand scheme of things, we have had a really positive first season back and everything is pointing in the right direction. Now we'll have some time off and in about a month's time we'll get back into getting things organised for 2017-18 and taking things to the next level, realigning our aims for the next campaign. We'll come back stronger, and wiser for the year we've now got under our belt. Looking forward to pre-season already. This project continues to be an exciting one and we're as passionate about it now as we were when it all began."

"It was an emotional day, from start to finish. For all that we knew we were underdogs, there was always that chance we might do something special on the day -- and we did. Every one of them gave us fight and determination and won a great number of battles on the park. The same fight and determination that has seen us get through the difficult earlier rounds of this cup, and throughout this season. A lot of football is about fine margins, and you don't get a finer margin than losing by one penalty. Ultimately we lost to a very good side in Orkney, who have been gracious in every respect when we have met them this season. They are a well run club who have a great deal of respect for this league, and they deserve every success that comes their way."

"There is a strong camaraderie about these Saints players. Gents from different footballing circles, many different backgrounds and from several age groups (and in some cases different generations). Some have won everything there is to win at this level, and others have it all ahead of them. Yet, they've come together and are all working together to the same goal. Above all, there has been no greater privilege for me as Chairman than to have watched St Duthus FC play throughout this season and to have had the chance to watch them evolve and cause the many upsets they have. Next season can't come quick enough."