LAST NIGHT's marquee friendly match against Dundee United's development squad was heralded as a grand success by all associated with St Duthus Football Club -- as a crowd of over 400 gathered to watch from the sidelines. Despite a tremendous effort from the Tain men, who were every bit of a match for their high profile visitors, United won the game by a small margin on the night -- a deflected strike from distance the only thing separating the teams.

The rain and thunder storms that were forecast earlier in the day thankfully held off for the game and the large crowd of spectators gathered around the Links awaiting the arrival of the delayed United team bus, held up due to a barge which had fallen on the A9. Led out by mascots Zef Ubych (United) and Mason Ross (St Duthus), each team took their positions for a 7.15pm kick off, with five subs named on each bench. For Saints, Liam Mcleod was unfortunately injured the warm up. 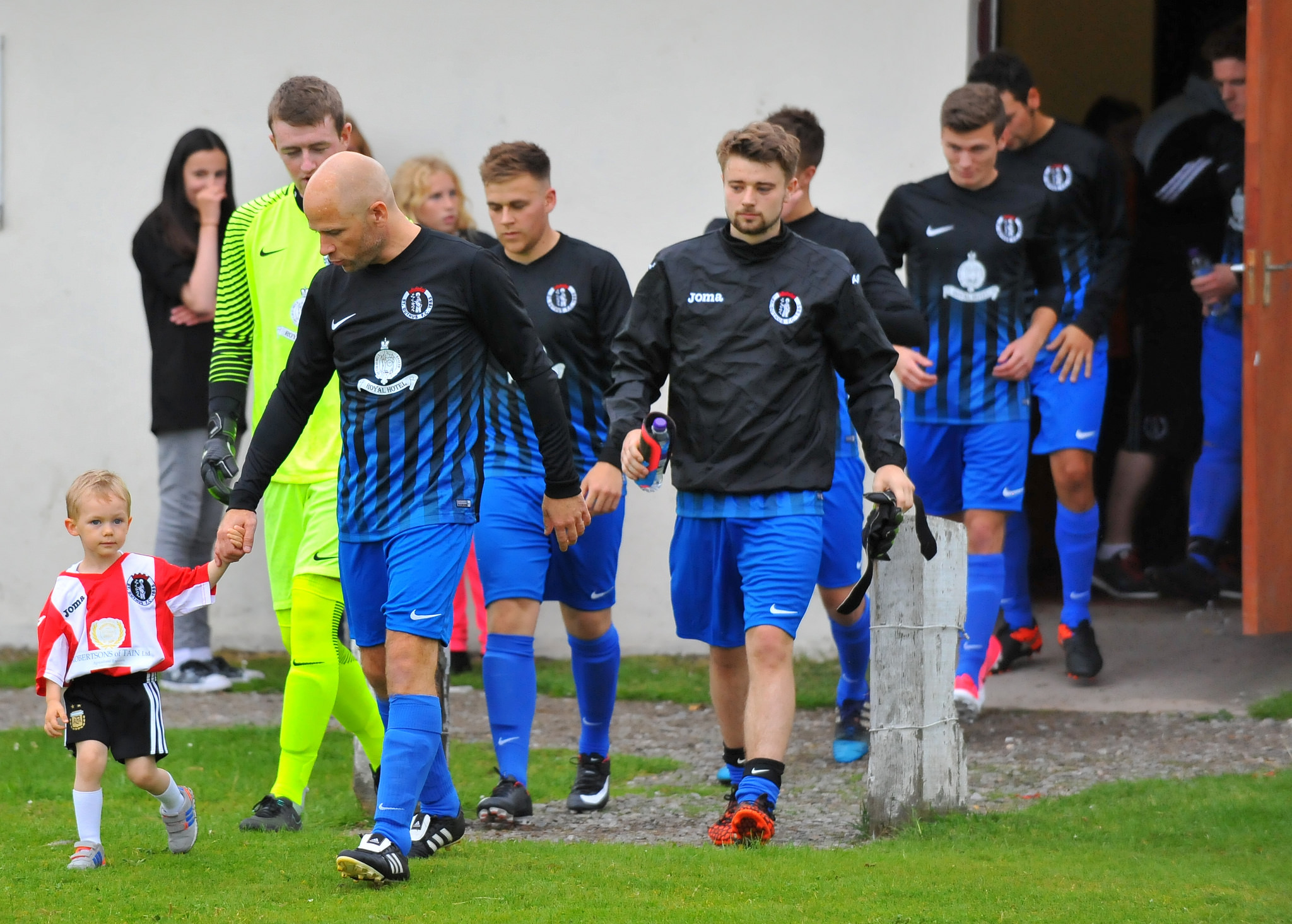 Before the match, the Saints were officially presented with their new change kit for 2017-18 by Ayaz Irshad, proprietor of the Royal Hotel.

The Saints wasted no time in letting their SPFL counterparts know that they weren't just here to make up the numbers. After just five minutes, Craig Ross was the first to offer a test for United's Josh Donaldson when a sweeping pass found the St Duthus man on the right side and he shot hard into the near post. The United stopper though was up to the test.

Ten minutes later, Donaldson had to be at his best yet again to keep out a Miller Mackay chance which seemed destined for the bottom corner, the dominant Saints forward man heading towards goal after great work from Ross to get the ball into the box.

With just over twenty minutes played, Craig Ross was unlucky not register his effort on target after doing well to beat his man on the right, but his shot from 15 yards flew just past Donaldson's near post. Just moments later, Jon Campbell arrived unmarked on the just outside the eighteen yard box, but after carrying the ball forward he sent his effort just wide of the post.

Just before the half hour mark, play stopped for a good while when the Tangerines' captain and centre half Scott Reekie took an unfortunate head knock before being replaced. Concerns for his condition were soon allayed when he took to his feet and recovered in the opposition dugout.

United's left midfielder offered the Terrors' best chance of the first half when his deflected shot flew past the post at Johnny Allan's near side. Louis Appere, the visitor's tall and imposing target man was limited to shots from distance which mostly flew wayward of the target, as he was largely kept at bay by the Saints' experienced centre halves John Skinner and Garry Macleod. In goal for Saints, Johnny Allan was rarely troubled by anything other than some mid-air catches. 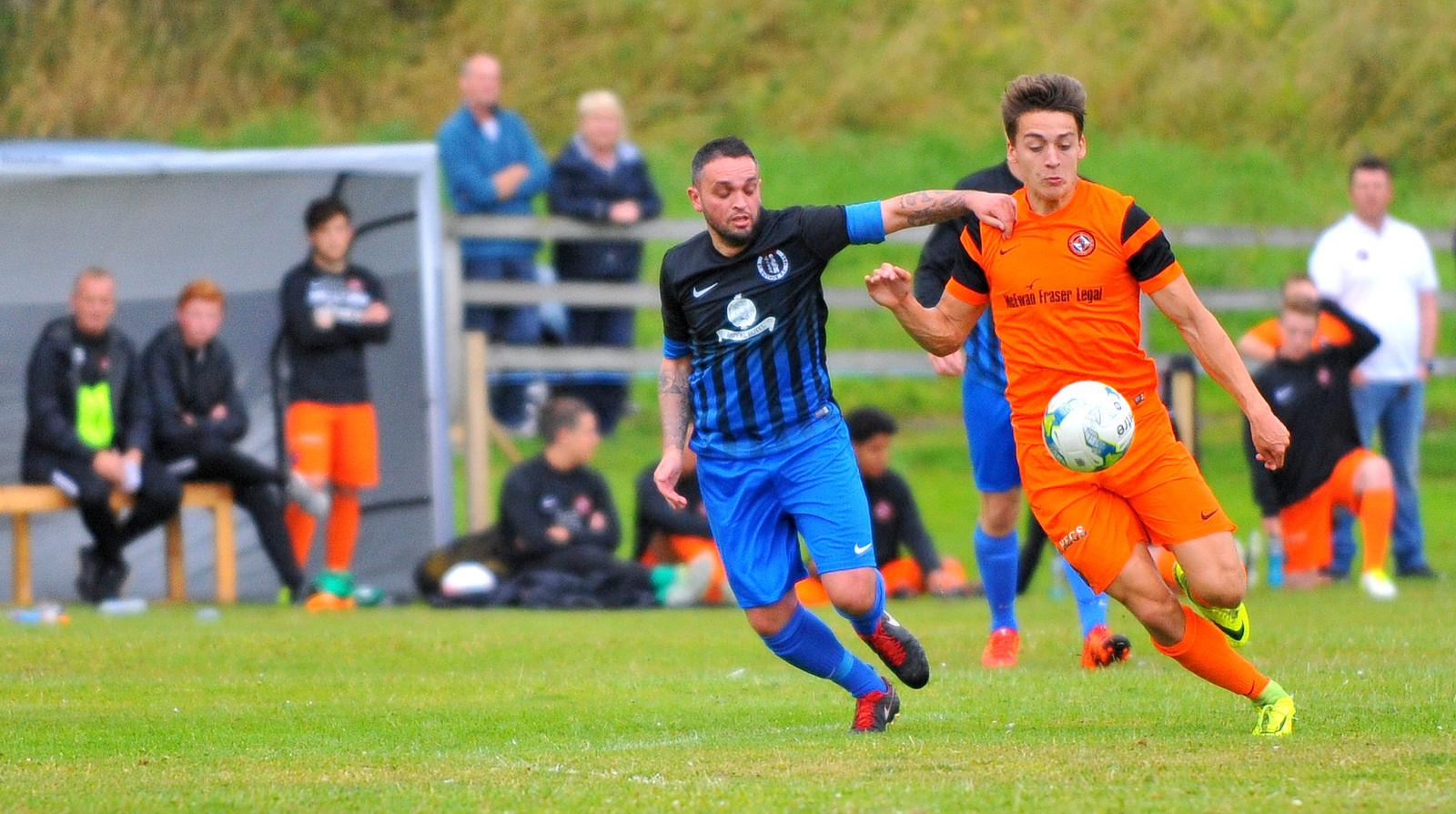 In the midfield, Cammy Mackintosh and Jon Campbell were particularly relentless in ensuring that talented midfield man and United first team veteran Willo Flood had a quiet afternoon, the latter bringing out the feistier side of his United rival in a series of exchanges. The only booking of the game was soon issued to Flood just before the break.

The first half ended with no scoring to speak of following a significant amount of stoppage time and messrs Stuart and Andrew Ross will have no doubt been happy with their side's performance in the first forty-five.

United came out of the traps fast in the second half and enjoyed most of the possession following the restart. On 56 minutes, the Terrors broke the deadlock with an opportunistic strike from 35 yards. Collecting a square ball, the Terrors' trialist left midfielder sent a long shot over the top of the defence, and after taking a deflection on its way his effort foxed Allan in the Saints goal and drifted into the net. Moments later, St Duthus narrowly avoided a two goal deficit when Kieran Inglis curled a shot towards goal which came back off the upright.

A corner for St Duthus soon after looked as though it had provided an equaliser when an all-at-sea Donaldson was left flapping at a Miller Mackay header before it was deflected away from goal for another corner. 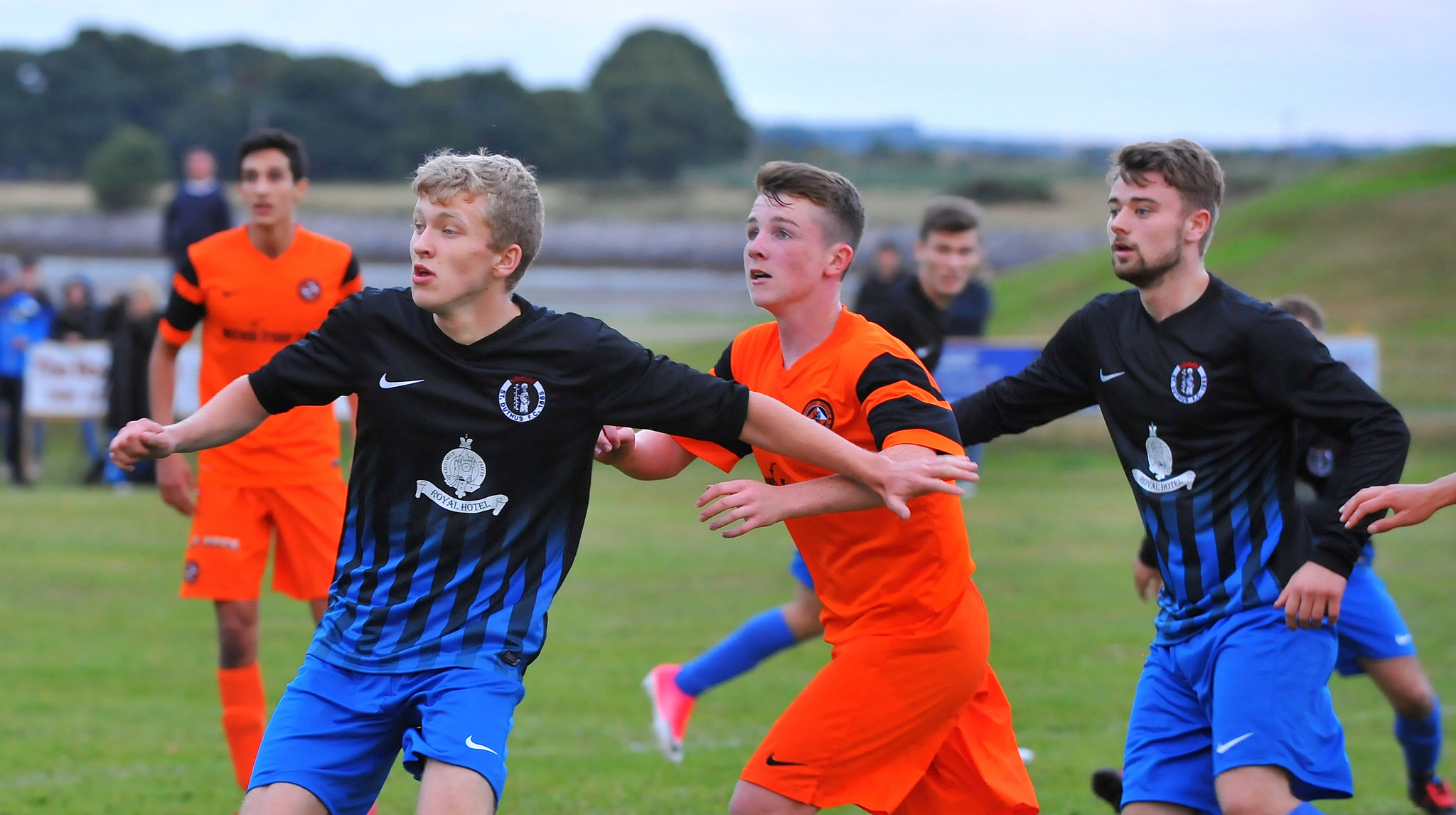 A lovely one two between Craig Ross and Miller Mackay sent the former off on a run down the left flank before he sent a low cross into the box, but before it could reach the waiting Ken Morrison, it was cleared to safety. A flurry of substitutions were made with twenty minutes remaining and the Saints were looking stronger again for the introduction of several forward players.

At the other end, John Allan saved well at his near post after a neat turn from Louis Appere who shot low into the corner.

A prolonged period of Saints pressure in the latter stages led to several chances from set pieces. The first, a free kick following a foul on their trialist midfielder was taken by Craig Ross, which after being deflected into the box eventually found Liam Rostock free on the left side, but the striker's curling effort flew wide off the top corner.

With ten minutes to go, Johnny Allan blocked a low shot from Dominic McMeekin with his feet at the near post after the Terrors substitute was played in on goal from a short free kick.

As the seconds ticked away, Will Ross was unlucky with an opportunity from corner, and moments later Jamie Skinner did well with a shot from distance that curled round the post.

Alas, despite the best efforts of the St Duthus men, an equaliser never arrived and the game ended 1-0.

At the time of writing, the Saints have two further friendly matches scheduled before the season begins, welcoming Brora Rangers' new U20 side on August 15th before travelling to Stornoway to play Lewis & Harris FC on August 19th.

Thank you to our raffle sponsors Glenmorangie Distillery and R Macleod & Son.