A PLACE in the Football Times Cup Quarter Final was secured thanks to a 2-0 win over Nairn County U20s yesterday, although not without a few scares along the way. Despite a below par performance, the Saints took a first half lead through Lewis Ross, before a stunning injury time goal at the end of a better second half guaranteed victory.

Without the absent Jon Campbell, Cameron Mackintosh and Andreas Broomfield, the Saints welcomed Lewis Ross, Garry Macleod and Miller Mackay into the squad, the latter making his competitive debut. Trialist Dean Fraser took a place on the bench, alongside the returning Louis Webster, Ewan Ross and Jamie Skinner.

The Saints laboured in the early going, with the ball looking like the proverbial hot potato. The first chance eventually arrived after eight minutes when a long throw from Liam Rostock was nodded into the danger area before the ball broke to back to Rostock just inside the box. The forward man's effort though was fired over the bar.

Play was stopped momentarily when Ken Morrison came off worst in a head collision after a quarter hour, and he was on the ground receiving treatment for several minutes before the game resumed. Shortly after, neat link up play between Rostock and Miller Mackay led to the latter squaring for Adam MacDonald just in front of goal, but the wing back's resultant effort was hit wide from six yards.

A long ball from John Skinner reached Rostock after 20 minutes, but Fraser Wilkie in the Nairn goal did well to intercept the ball and prevent a certain chance for the Saints forward man. At the other end, Sheamus McConaghy offered a very capable effort towards goal from 20 yards, which was headed high and on target. Steven Martin though, was up to the test, holding well. A continued spell of Nairn possession presented Sam Campbell with a chance to put the visitors ahead with 25 minutes gone, finding space to fire a chance over the bar from outside of the area.

With half an hour gone, Miller Mackay did well to nod the ball past Wilkie from a long ball, but reaching the ball from an angle, his shot on goal could only hit the side netting, taking a deflection on the way to win a corner. Minutes later from a corner, St Duthus opened the scoring, and it was Lewis Ross who notched the all important goal when he turned the ball into the net after great low delivery from Rostock. The goal was a fortuitous reward for the Saints based on the game so far, but in the moments that followed, it proved to be the catalyst for an increase in tempo.

Just a minute later, Mackay travelled with the ball along the byline before cutting back to Rostock and Wilkie had to be alert at his near post to prevent a net bound effort. Three minutes later, a great cross from Joe Sutherland met the head of Will Ross who nodded just over the bar.

Four minutes before the break, Rory Patience did well to power through the Nairn defence and carry the ball into the box, and were it not for a clearance in front of goal, he may have extended the Saints' lead. Moments before the half time whistle, the Mackay-Rostock connection foxed the Nairn backline again, before the latter forced another save from Wilkie.

The early introduction of substitute Jamie Skinner almost led to a second for St Duthus with 56 minutes played, when the midfielder played an excellent through ball to Mackay, but Wilkie again was on hand to gather just before Mackay could get the all important touch on the ball.

Ken Morrison, still suffering the effects of the earlier head knock was unlucky not to hit the target with a long range strike that flew just over the bar. Just after the hour mark, it was Rostock who forced a save yet again, collecting a well timed through ball from Patience before hitting an angle drive into the palms of Wilkie. Chances were still coming at the other end, and Matty Macleod was unlucky not to notch a leveller for County on 68 minutes when he shot over the bar from just inside the box.

Miller Mackay was unlucky not to score with 15 minutes remaining, Fraser Wilkie doing well to block a shot from close range and from the resultant rebound, Rory Patience fired a shot towards goal that had to be deflected wide. Soon after, substitute Dean Fraser linked up well with Adam MacDonald to leave the latter with a chance on goal, but his shot was deflected wide by Wilkie.

An unfortunate injury suffered by Adam MacDonald delayed play for a few minutes when he fell awkwardly on his knee, leaving the home side with ten men for the remainder of the game.

At the death, it seemed as though Macleod would surely equalise for County when he found himself with a clear chance to score, but his shot across the face of Martin's goal flew just wide of the far post, handing the Saints a massive reprieve. Just a moment later, St Duthus secured the victory when Rory Patience collected a ball 20 yards from goal and sent a powerful effort beyond Wilkie and into the corner of the net.

The result sends St Duthus into the Quarter Final of the Football Times Cup which is to be played on September 30th, when they will travel to Dalmore Park to meet neighbours Alness United. 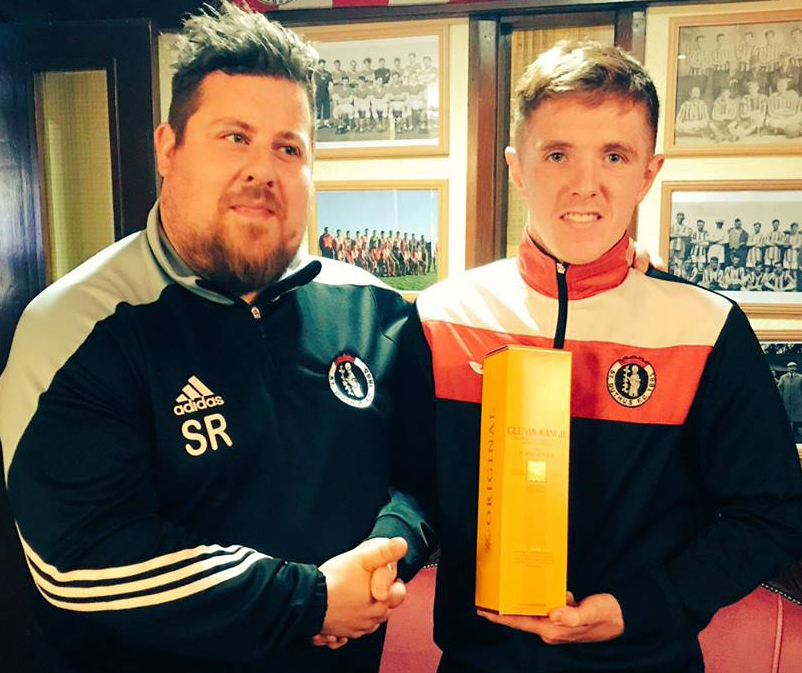