THE SAINTS advanced to the semi-final of the Football Times Cup thanks to a penalty shoot-out win over Alness United at Dalmore Park this afternoon.

For today's match, St Duthus made two changes to the side who played at Golspie last week, with Will Ross coming in at left wing back, and Jamie Skinner replacing Scott Miller wearing the number nine shirt. Finn As-Chainey also returned to the squad to take a place on the bench.

Alness United set the pace early on and looked the more lively of the two sides, but it was the Saints who were first to offer a shot on goal after a long throw from Liam Rostock was cleared back into the path of the striker, before his curling effort towards goal was steered away and out for a corner by Jodie Campbell.

With five minutes gone, the Saints needed a block from Garry Macleod to prevent a powerful Fraser Sinclair effort from hitting the target, and just a minute later Steven Martin could only watch as a looping effort bounced off the crossbar and back into play before an offside decision prevented a rebound shot which was destined for the net.

Twelve minutes in, Jon Campbell did well inside the Alness area to lay the ball back to Jamie Skinner for what seemed certain to be the opener, but Jodie Campbell did very well to prevent Skinner's lashed effort at his near side as the ball was directed past the post. 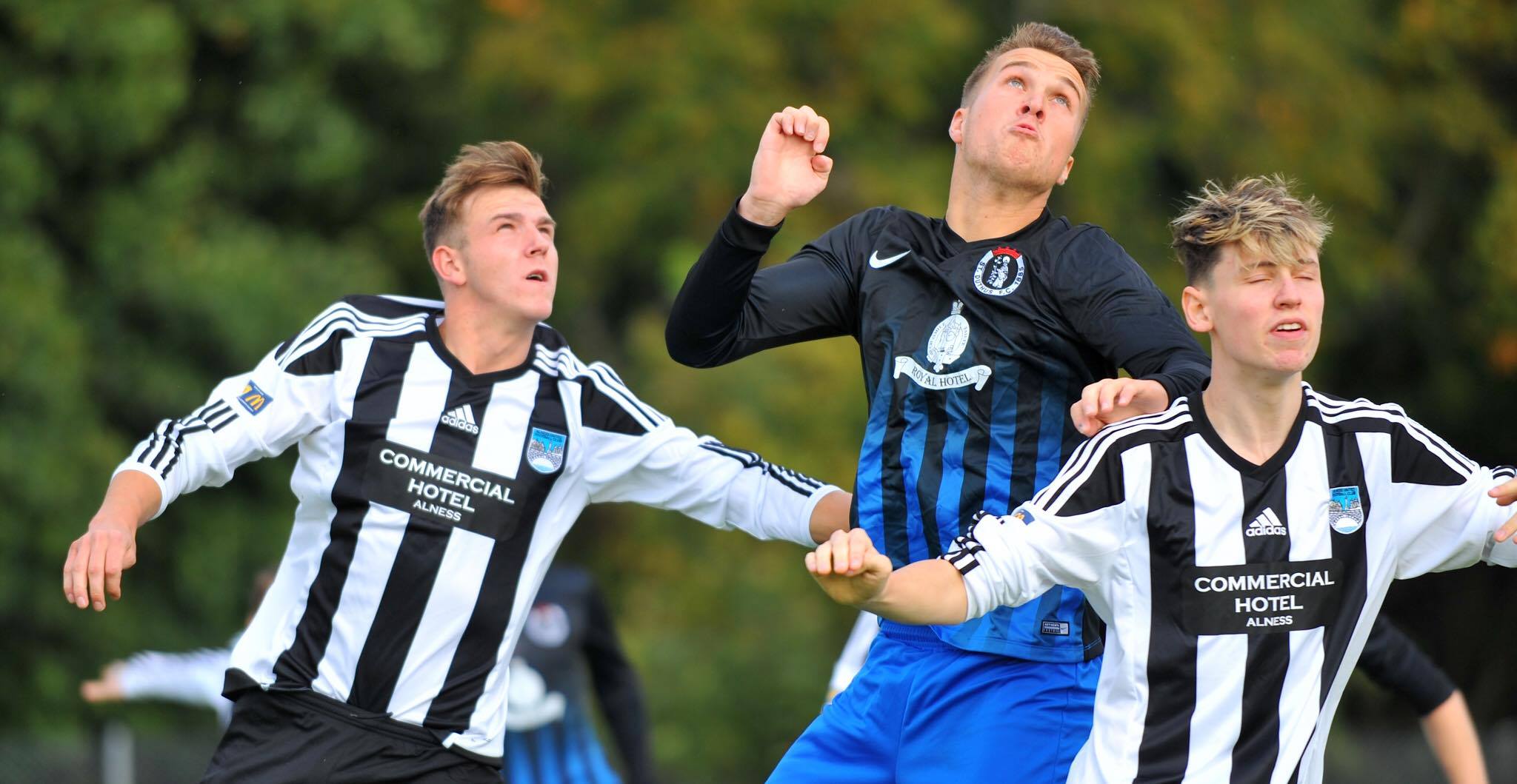 A great ball from Rory Patience on the quarter hour found Joe Sutherland on the right flank before the wing back produced an excellent cross which just evaded Jamie Skinner in the box. Just a moment later, Callum Johnston will have felt he could have done better for the home side with a chance on sixteen minutes, after he collected a pass following a throw in before shooting low into the arms of Martin.

Saints marksman Liam Rostock was in the thick of the action again on 24 minutes when he found himself clean through on goal, but Campbell in the Alness goal produced a good stop to prevent the Saints forward's angled drive.

The opening goal arrived on 27 minutes and it took a piece of quality to break the deadlock. Finding himself in good space, Daniel Lowe found the far corner of the net with a 30 yard strike which foxed the Saints back line and Martin in goal.

Within a minute the Saints could have hit back instantly thanks to some individual play from Jon Campbell. Carrying the ball forward, the St Duthus captain broke past the Alness defence to find himself through on goal, but his eventual shot across the Alness 'keeper flew just wide.

On 36 minutes, Patience played a good ball across the face of goal for Joe Sutherland, but the wing back's effort sadly missed the target. The midfield man was in amongst it again moments later when he broke down the middle to play a quick ball to Campbell, and from the resultant through ball Liam Rostock was presented with a great chance to score. Jodie Campbell in the Alness goal, though, was again up to the test.

At the other end, the Saints breathed a sigh of relief when a double save from Steven Martin prevented Alness from doubling their lead before the break. From the resultant throw, Rob MacCormack hit the side netting.

As the half drew to a close, Jon Campbell turned to create space and forced a save from his namesake with a shot from the edge of the box.

Second half substitute Finn As-Chainey offered an early indication of his threat with some persistent battling on the right side, before sending a dangerous ball into the box which just failed to reach its target. At the other end, Daniel Lowe looked to double his tally with a low drive, but Martin held the effort.

On 53 minutes, the Saints were appealing for a penalty kick after a handball from Dave Murray, but referee Gavin Dearie waved play on. 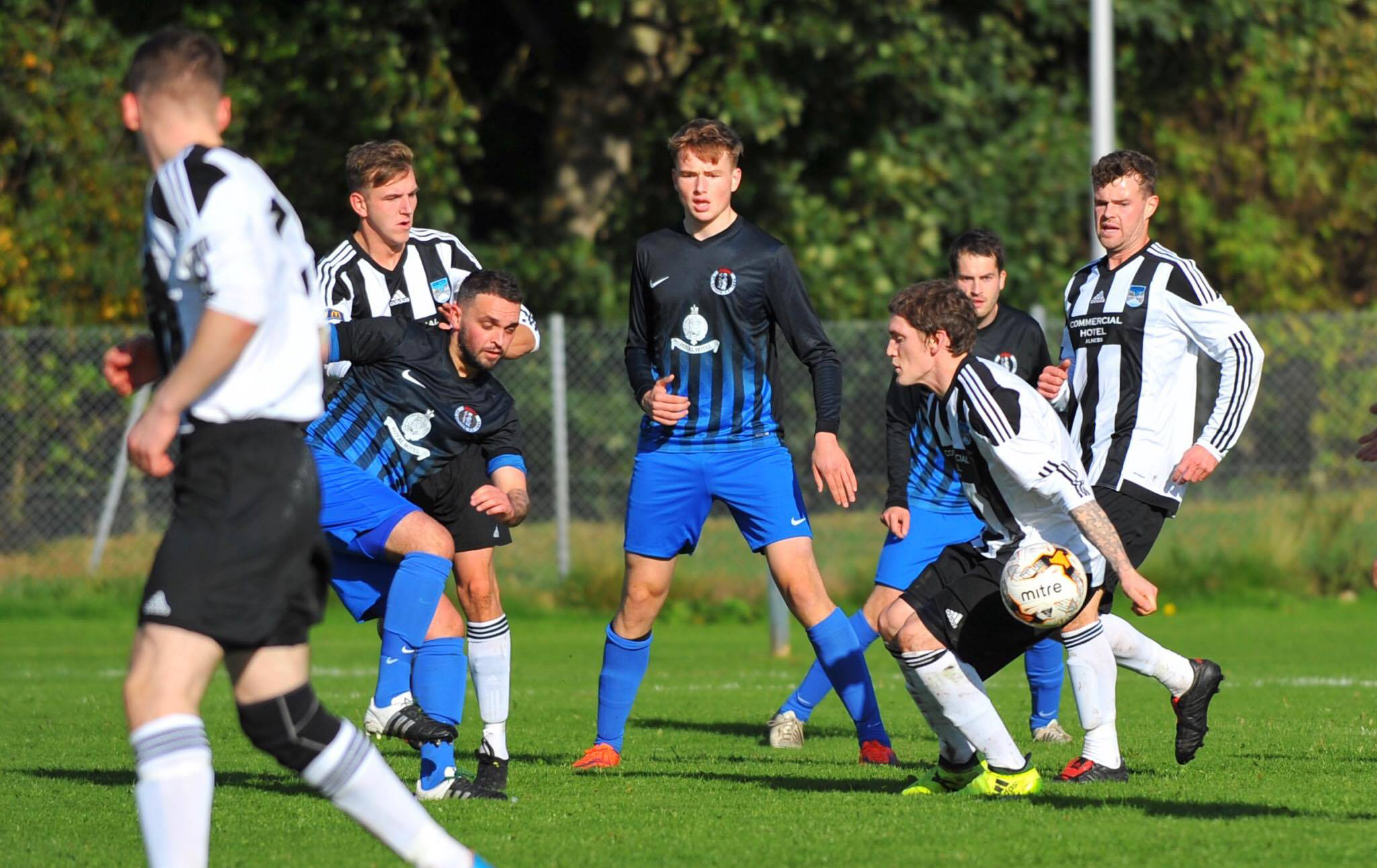 Four minutes later, good interplay between Jon Campbell and Rostock saw the former just narrowly miss out on an excellent goal scoring opportunity after the latter had played the ball across the face of goal.

A moment of madness at the back let the home side in for a chance as Lowe was left to break towards goal, but the Alness man's shot flew over the bar. A free kick for Saints two minutes later was taken by Liam Rostock and held well by Campbell low at his near post.

In the 65 minute, the Saints got the leveller they deserved. Jamie Skinner showed great determination down the right wing to hold on to the ball before sending a low cross along the byline. Connecting with the ball in the box, Rostock was on hand to send it over the line and into the net to score his fourth of the season.

A frenetic period of back and forth action ensued as both sides looked to snatch a winner. A foul on As-Chainey led to a great set piece from Jon Campbell into the Alness box, and inexplicably, the ball stayed out of the net as a stramash of chances finished with the ball flying just over the bar from six yards.

A series of corners for Alness with ten minutes remaining had Saints' hearts in their mouths, but resilient defending from the back line ensured that the United efforts were in vain.

As the game was in its dying stages, Rob MacCormack offered the final hope for Alness with a dangerous ball across the face, which ultimately trundled to safety. The last action of normal time was a beautiful cross from As-Chainey which reached the head of Scott Miller, who bulleted the ball just over the crossbar, agonizingly thwarting his chance to snatch an injury time winner.

A penalty shoot-out followed. Alness defender Mikey Rae set the standard with a well taken spot kick before Liam Rostock levelled. Gordon Finlayson made it 2-1 and then Ken Morrison netted his penalty to keep the scores even.

At the third time of asking however, Martin MacDonald saw his effort saved and pushed onto the crossbar by Steven Martin, before Will Ross scored to give the Saints the advantage.

After Daniel Lowe had scored his kick for Alness, John Skinner made it even when he blasted his effort over the bar. The repreieve was only temporary though, as Martin held Ryan Stewart's low kick to restore the Saints advantage. It was down to Scott Miller to score the winning penalty, and that he did, with a well taken shot into the bottom corner.

The victory sets up a semi final encounter between St Duthus and Lewis & Harris at the Links on October 14th, which will be the first meeting between the two clubs.