IN A GAME which was short on clear cut chances, St Duthus were forced to settle for a share of the points following a late equaliser for Alness United at the Links yesterday.

Manager Stuart Ross re-introduced Liam Mcleod to the side following the midfielder's suspension in December. Cammy Mackintosh missed out due to a holiday commitment while Liam Rostock and Alan Davis were also unavailable due to trips abroad, allowing Jamie Skinner the chance to start up front for the first time since his back injury. Paul Cowie returned to the starting eleven as part of the back three, while Will Ross and Adam MacDonald both dropped to the bench.

In the third minute, Paul Cowie did well to beat two players before getting into space for the first chance of the game, but the defender's eventual shot flew just over the top right hand post.

A long cross into the box from Garry Macleod met the head of Ken Morrison who headed just wide on 16 minutes, and at the other end a shot was sent high and wide leaving Steven Martin with little to worry about. 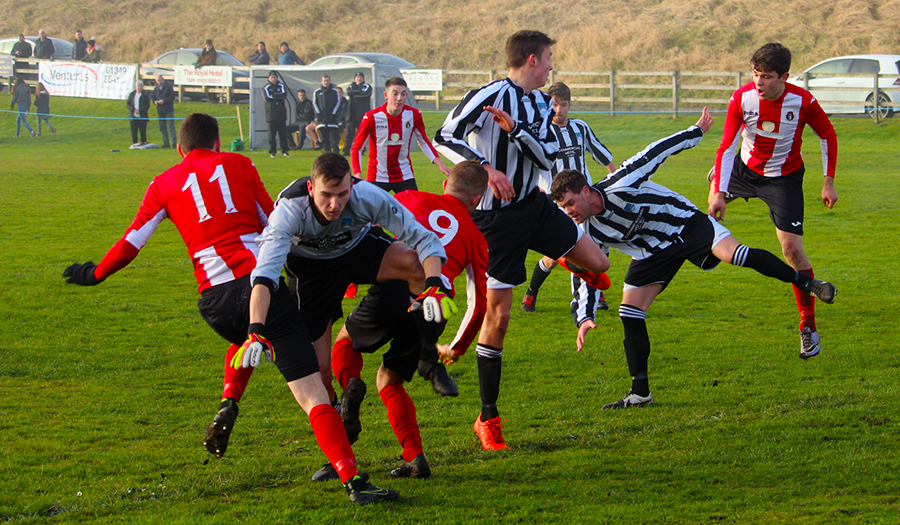 A Jamie Skinner corner on the half hour mark looked to have escaped the grasp of Alness keeper Michael Rae as he tumbled in the box between Morrison and Scott Miller, and as the loose ball looked to fall to Sam Beeston, the referee blew for a foul on the Alness custodian.

With ten minutes left before the break, Jon Campbell did well to dribble past a wall of defenders but the midfielder's final shot on goal was tame and trickled past the post.

It looked as though the Saints had taken the lead just on the stroke of half time after a Jamie Skinner corner flew to the far post, but Garry Macleod's lashed shot flew across the goal and wide of the target.

Persistence in possession led to the opening goal on the 50 minute mark, and it was the Saints who broke the deadlock. From the left wing, Sam Beeston played a dangerous ball into the Alness box, and pouncing on the opportunity at the edge of the six yard box was Jamie Skinner who steered the ball beyond the outstretched Michael Rae.

Sam Beeston nearly capped off his fine assist with a goal on the hour mark when he shot wide of Rae's post from the edge of the eighteen yard box.

Liam Mcleod was unlucky not to make it 2-0 with twenty minutes remaining, finding space inside the box before tucking his shot just wide of the post. At the other end Paul MacDonald headed just over from a free kick.

With the tackles coming in thick and fast, Alness won a free kick thirty yards from goal with fifteen minutes remaining, and the set piece found Peter Kelly in the box who slotted the ball in to the right hand corner of the net -- but as the ball was the struck, the far side assistant had flagged for offside, and the Saints breathed a (temporary) sigh of relief as referee Chris MacLeod chalked the goal off.

Shortly after, a great piece of play saw Scott Miller bear down on goal with the seemingly straight forward task of beating Rae, but a brilliant block twarted the Saints' top scorer.

Substitute Martyn Farquhar tested Rae in the Alness goal with an effort from long range on the 80 minute mark and moments later, Adam MacDonald did well to block a clearance from Rae and the stopper was forced to chase the lost ball all the way to the sideline before it was cleared to safety, in a rocky moment for the visiting side. 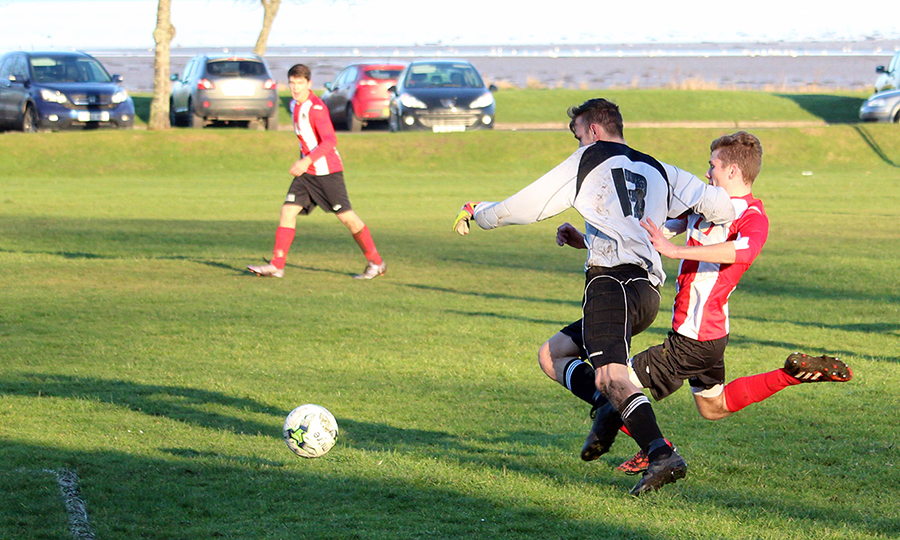 With a minute of normal time remaining, Alness equalised. A poor clearance was squared back across goal and waiting at the far post, Peter Kelly controlled the ball before tucking it underneath Steven Martin.

In injury time, the visitors could have grabbed a late winner when Kelly broke free, but the ever dependable John Skinner timed his tackle to perfection to prevent the striker from doubling his tally.

"The match was a typical first game back after the winter break. The boys took 45 minutes to get going and even in the second half, there wasn't a lot happening in terms of chances. We weren't working hard enough in several areas of the pitch, sluggish at times, and although we got the goal, we sat back and allowed Alness to come back into the game and ultimately get the goal they deserved. It's a disappointing result as losing a lead so late can feel like a defeat, but on reflection, a draw was a fair result on the day. They did more than enough to merit their point."